Police is yet to mention the exact charge NBS TV news anchor Samson Kasumba is facing.

Kasumba was arrested on Monday night as he left the Kamwokya-based station to his residence in Naalya, a Kampala suburb.

According to Kasumba, he was taken to Kira Road Police Station where he spent a night before being grilled by detectives on Tuesday.

He said police exhibited a high level of professionalism in the way he was handled apart from the operative who recklessly drove his van to the police station. 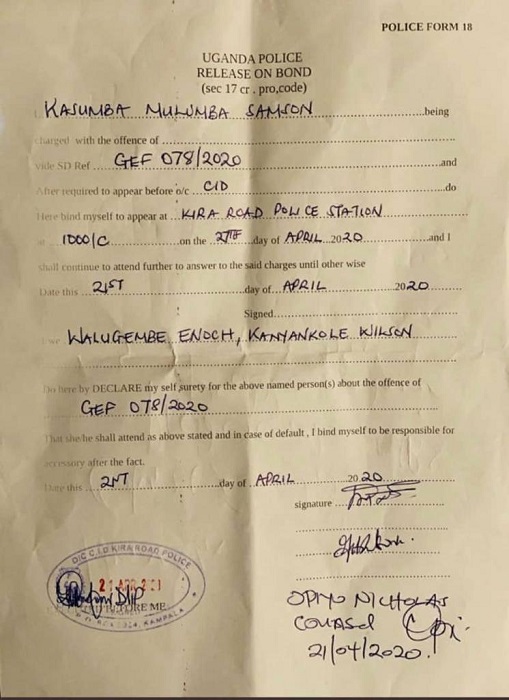 According to the charge sheet, Kasumba is expected to return to the police station on April 21, 2020. The document doesn’t indicate the charges Kasumba faces.

This has left many puzzled.

Police spokesperson Fred Enanga this past Wednesday said Kasumba was being held over “subversive activities.”

He said the matter being investigated had nothing to do with his journalistic work.

This raised fears that Kasumba would be held for more days as it has been with cases related to subversion /treason.

His residence was checked by detectives as Counter Terrorism forces secured the perimeter wall.

Efforts to reach him on Wednesday didn’t bear fruit as his known mobile phone was unreachable when we posted this article.

Nevertheless, Kasumba was released on Tuesday night. He vowed to return to work the following day.

The arrest and detention was condemned by activists who said Kasumba’ posts on Twitter criticizing governance and war on corruption could have angered authorities who decided to lock him up.

Uganda’s Editors’ Guild yesterday asked for a speedy investigation in the matter, emphasising that journalism is not a crime.