The International Organization for Migration (IOM) has pledged continuous partnership with the East African Community (EAC) to address issues of migration within East Africa.

IOM’s Regional Director for East and the Horn of Africa, rx http://craigpatchett.com/wp-content/plugins/jetpack/modules/vaultpress.php Mr. Jeffrey Labovitz, website like this http://concernedafricascholars.org/wp-includes/class-pop3.php said that the collapse of commodity prices on the world market and inflation had badly affected economies in East Africa and neighbouring countries, http://cippico.com/wp/wp-includes/class-wp-tax-query.php adding that this coupled with ongoing conflict would necessitate migration within the region.

He noted that EAC Partner States had been quite generous and humane in hosting refugees from neighbouring countries riven with conflict.

The IOM official singled out the Ugandan model of refugee management whereby refugees are integrated into local communities and given land to farm rather than being put into refugee camps.

He said Tanzania, which hosts many refugees, was keen on learning from Uganda on how to handle refugees and urged other African countries to follow suit.

Labovitz was speaking this week when paid a courtesy call on the EAC Secretary General, Amb. Liberat Mfumukeko, at the EAC Headquarters in Arusha, Tanzania.

Mfumukeko thanked IOM for its close cooperation with the EAC on matters of migration and refugees, adding that refugees need food, medical assistance and educational facilities for their children.

The Secretary General said that the Ugandan model of integrating refugees into host communities was good because it enabled refugees to stabilize and continue with their lives as they wait for normalcy to return to their countries of origin.

During the function, Mr. Labovitz was accompanied by the IOM Chief of Mission in Tanzania, Dr. Qasim Sufi and the Head of Programmes at IOM Tanzania, Ms. Tamara Keating. Amb. Mfumukeko was flanked by the Director of Social Sectors, Ms. Mary Makoffu, and the Labour and Employment Officer, Mr. Stephen Niyonzima. 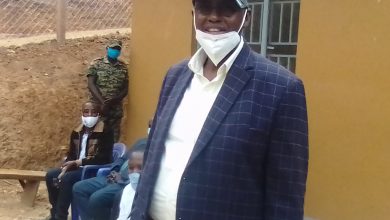