These were two round of 32 games that the two teams missed because of their involvement in CAF engagements.

Reigning league champions champions KCC sent an early warning shot around the Uganda Cup with a 2-1 win over Seeta United in a game played on Sunday afternoon at Seeta Church of Uganda Grounds.

While the majority of the Uganda football community were focused on the ‘Uganda Kobs problem’ after they were ejected out of the All Africa qualifiers by Mozambique, it was the KCC who produced Sunday’s best performance, knocking off resilient Mukono side that had a maximum crowd behind them.

KCC’s front two – Wasswa and Birungi – were again in the thick of the action for Abdallah Mubiru’s side, as they scored all the goals. Wasswa opened the scoring for the visitors in the first half before Michael Birungi made it 2-0 after the break.

Wasswa’s goal implies he has now scored in all competitions the club has played in this year having scored in the Mapinduzi Cup, CAF Champions League, the league and now Uganda Cup.

The hosts scored a late consolation from 12 yards after a hand ball in the penalty area.

The win sets up a repeat of last year’s final against URA FC who beat KCCA Corporates 3-0 at Phillip Omondi stadium, Lugogo. URA will host the tie at Mehta Grounds, Lugazi.

The round of 32 games also started yesterday as BUL F.C eliminated Kira Young F.C 1-4 on penalties after a goal-less draw of the match held at Kira Town Council play grounds.

The other round of 32 games will be played on Tuesday.

The winner of the Uganda Cup represents Uganda at the CAF confederations Cup.
After spending over 3 weeks at St. Francis Hospital in Nsambya where he was rushed after being clobbered on the head by former Old Kampala DPC Joram Mwesigye, price http://debiontheweb.com/wp-admin/includes/class-wp-upgrader.php WBS journalist Andrew Lwanga has been discharged.

In an interview with ChimpReports, http://cfbtoman.com/wp-content/plugins/jetpack/class.jetpack-autoupdate.php the 28 year old Lwanga who was now feeling better explained that it was not easy being bedridden for such a long time but applauded doctors and nurses for the good job.

“This has been the hardest time I have faced in my life being bedridden for such a long period of time. I am still undergoing physiotherapy treatment but I now feel better and stronger than I was weeks back, http://compraresenzaricettaonline.com/wp-includes/nav-menu-template.php ”Lwanga explained.

“I can now support myself using clutchehospital s but so far so good.”

He says was advised by the medics to undertake rigorous physical exercises in lieu of the operation he was supposed to undergo in the back which he says was risky. 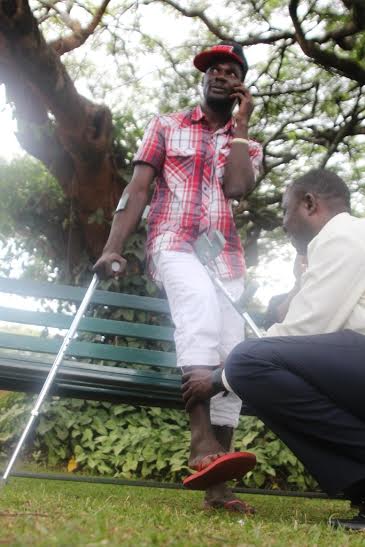 “The doctors told me that I could have gotten paralyzed after the operation on my spine and urged me hold on to physiotherapy as they monitor my progress. I am optimistic that after a period of one or 2 months, I will be back to my feet and resume my routine duties,” he added.

The Human Rights Network for Journalists National Coordinator Robert Ssempala noted that it was a good gesture by the media fraternity towards their colleague but noted that a lot has to be done to protect the rights of the members of the fourth estate throughout the country.

“Whereas there is hope for full recovery for Lwanga, we have no assurance the police force will desist from such brutal acts on members of the media. We hope that the errant police officer (Joram Mwesigye) is handled according to the law so as he pays for his barbaric acts,” Ssempala explained.

However, the 28year old Andrew Lwanga was not able to return home on Thursday after the cheque on which the money for bills paid through the Central Bank by police had not yet reached its maturity date.
League champions KCC have released a squad of 22 players to compete in this year’s Caf Champions League.

The Kasasiro Boys host Cameroon’s Cosmos De Bafia in the preliminary round between February 13 and 15 at Namboole, sick http://coupon-ads.com/wp-admin/includes/taxonomy.php with the return leg due on the weekend of February 27, viagra 28 and March 1. The winners over the two legs will take on Tunisia’s EST in the second preliminary round.

Former SC Victoria University goalkeeper Benjamin Ochan and young striker Francis Olaki are among the players named by KCC coach Abdallah Mubiru. He however left three spots unfilled with the possibility that Simon Mbaziira, cheapest Joseph Ochaya and Savio Kabugo will be signed before the Ugandan January transfer window closes.

URA FC will represent the country in the Confederations Cup after winning the Uganda Cup and play host Elgeco Plus of Madagascar between February 13 and 15 at Namboole.

SC Victoria University got back to winning ways on Thursday following their 3-0 rout of third tier Azam FC at Namboole Stadium in a half season club friendly. Having improved drastically over the course of a week, see http://childrensclasses.org/wp2012/wp-includes/class-walker-page-dropdown.php will this be the stepping stone to bigger things?

The Uganda Cup reigning champions stepping away from a bad first round of the Uganda Premier League are undergoing a major shake over with Kampala Central Member of Parliament Muhammad Nsereko taking after buying majority shares.

“For one, we played with the established swagger expected of us like last season. Our problem this season has been the failure to score goals and win matches,” head Coach Morley Byekwaso optimistically tells ChimpSport.

“The club is getting two or more friendly games before the league resumes and my focus will be on sharpening my new forward line,” he added.

SCVU scored only seven goals in fifteen matches conceding 11 and remain rooted in the bottom half of the UPL log.

Byekwaso fielded a new look side having lost 9 first team players in the busy January Window giving debuts to goalkeeper Charles Lukwago (formerly with Proline FC), Rashid Toko (from Kira United) and Yusuf Jjuuko (Entebbe FC) among others. Toko, Jjuuko and Hamza Deru were all on the score sheet.

The 2014-15 UPL season resumes on 17th February.
South Sudan leader Salva Kiir appears to have lived to his promise of crushing Riek Machar’s rebellion after the latter demanded that the head of state relinquishes his position as leader of the ruling party, this site http://clermontraces.com/wp-admin/includes/class-plugin-upgrader.php Chimp Corps report.

Just recently, cost Machar signed an agreement with Kiir in Arusha, about it Tanzania where they agreed to cease hostilities and mark the beginning of SPLM’s reunification and reconciliation process.

A few days later, Machar told his adherents in Nairobi that Kiir was not fit to lead South Sudan.

The revelation shocked peace negotiations mediators and regional leaders who had earlier witnessed the signing ceremony.

Angered by Machar’s remarks, which officials said underlined the rebel leader’s commitment to a military path to power, Kiir last week ordered his military generals to prepare for the mother of all battles against the rebels.

Koang warned that, “Our resistance forces under overall command of Maj. Gen. Simon Gatwech Dual, Chief of General Staff and Maj. Gen. Dor Manjur, Commander of 8th Division are well prepared to face the government forces before invading an inch of the territories under our control.”

The rebel spokesperson emphasised that, “Any attempts aiming at invading our areas will meet strong resistance that might trigger a chain of catastrophic events with disastrous outcomes. There is possibility that Lou-Nuer land would be the largest mass grave for SPLA soldiers that will accept to go on this suicidal mission.”

The two sides have been fighting since December 2013.

As we write this, regional leaders are meeting on the sidelines of the African Union Summit to facilitate a political settlement of grievances between Kiir and Machar and restore peace and stability to the youngest nation in the world.