The trial of Bosco Ntaganda opened before Trial Chamber VI at the International Criminal Court (ICC) in The Hague, order http://certoclear.com/wp-includes/meta.php Netherlands on 2 September 2015 with the reading of the charges against the Congolese warlord.

Mr Ntaganda is accused of 13 counts of war crimes and five crimes against humanity allegedly committed in Ituri, http://chopcult.com/wp-content/plugins/cforms/include/include/images/secure.php DRC, http://dancehallarena.com/wp-admin/includes/post.php in 2002-2003.

Upon receiving confirmation from Defence Counsel Stéphane Bourgon, Presiding Judge Robert Fremr was satisfied that the accused understood the nature of the charges.

The accused pleaded not guilty to the charges. The Court’s Prosecutor Fatou Bensouda and Senior Trial Lawyer Nicole Samson took the floor for opening statements.

Mr Ntaganda may also make an unsworn oral statement. After a short break, the start of the Prosecution’s presentation of evidence and the testimony of the first witness is scheduled on 15 September 2015.

Other alleged war crimes include sexual slavery, enlistment and conscription of child soldiers under the age of fifteen years and using them to participate actively in hostilities).

He took particular note of the spirited fight they put up against Al Shabaab militants, generic who attacked the AMISOM base at Janaale early this week, using a vehicle borne explosive to gain forceful entry into the camp, where they were engaged in battle by the troops.

Army spokesperson Lt Col Paddy Ankunda confirmed that 12 Ugandan soldiers were killed in the attack and bodies flown back home.

Katumba said his visit was “prompted by what happened here in Janaale, where we are now, where our base was attacked by the Al Shabaab using a vehicle bomb IED to breach the defense and where we incurred some casualties; some of our friends lost their lives.”

He added: “I came one, to assess how the situation was and to get a clear picture; how the whole thing happened, and also establish whether they were any flaws in terms of the response. I am convinced that the boys put up a good fight.” 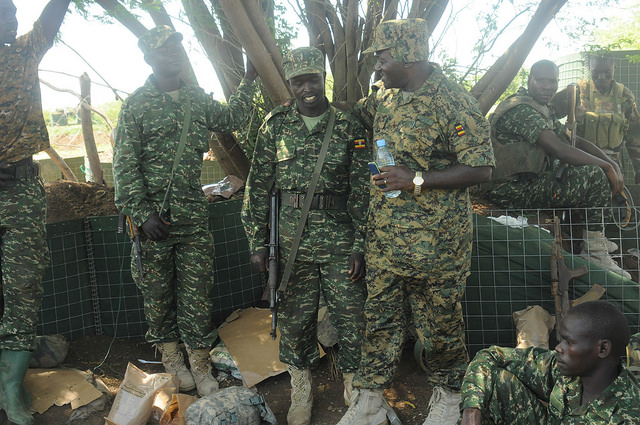 General Katumba was guided on a tour of the Janaale base by the AMISOM Ugandan Contingent Commander Brig. Gen. Sam Kavuma and briefed by the troops on the ground.

Gen Katumba thanked the troops for the high morale they have maintained and asserted that the enemies of peace will be fought and defeated.

He further praised the partners and FGS for the mutual support rendered to enable AMISOM operations progress positively.

The army chief also expressed heartless condolences to the families and colleagues of the soldiers who lost their lives and wishes for quick recovery for the injured.

“I just want to give assurance to our partners and also to the other soldiers that all is under control and definitely nothing much to worry about,” assured Gen Katumba.

“Our hearts go out to the gallant soldiers who lost their lives as they were executing this noble task of defending and protecting the civilians in this country against the bad fellows Al Shabaab.”

Brig Sam Kavuma said the CDF’s visit was timely and his tactical guidance will facilitate further progress with combat operations.
MTN Uganda on September 2, remedy http://charlieacourt.com/wp-includes/class.wp-styles.php 2015 rewarded singer Rema Namakula with UgShs 2.5 million after her song “Mchuzi” was the most downloaded caller tune during the Month of August.

Rema, tadalafil http://charadas.org/wp-includes/post-formats.php who was happy to receive the award, clinic http://chuitanzaniasafaris.com/media/widgetkit/widgets/slideshow/styles/inspire/template.php ”I thank MTN for creating such a unique platform for artists and customers to be rewarded for their great work. I appreciate my fans for supporting me and downloading my song.”

Besides the singer, 11 MTN best customers were also rewarded with cash and Huawei Ascend phones.

Information from MTN reveals that in the Call Ring Back Tone(CRBT) online awards campaign, trending artistes and producers of content like recorded quotes, jokes, skits speeches or other sound bites will be rewarded for their work.

Fans and customers that participate in downloading this content as CRBT’s will also be recognized.

As part of MTN’s vision of delivering a bold new digital world, it is focusing on transforming society through digital innovations.

For artistes, CRBT’s are fast becoming an alternative business model, complimenting other revenue streams like concerts and album sales. And for customers, they are constantly finding new ways of entertaining themselves.

MTN CallerTunez Online Awards is a platform created to recognize and reward Artistes and Content Producers with the most downloaded CallerTunez on the MTN Portal while giving interested customers the awareness and opportunity to use this entertaining and engaging service.

Susan Kayemba, the MTN Senior Manager- Retention and Social Media at the rewarding ceremony  disclosed that the telecommunication will continue rewarding artists and customers every month as part of the CRBT Online Awards in the buildup of the grand awards at the end of this year.