The new maternity ward was constructed by Eskom, sale the largest generator of electricity in Uganda, in Partnership with Hon. Grace Moses Balyeku, MP of Jinja West in Jinja district, Busoga Sub-Region.

The President congratulated and thanked Hon. Balyeku for taking up responsibility, approaching and working with Eskom to construct a health centre in Jinja Municipality. He reminded the people of the area to embrace the health strategy of the NRM Government that entails taking children for immunization, practicing good hygiene, sleeping under treated mosquito nets and avoiding reckless living in order to avert the HIV/AIDS scourge. He added that if people followed the recommended ways regarding healthy living, they would prevent 80% of the diseases that afflict them.

“Those that don’t care about healthy lives qualify to go to hospitals,” he noted. 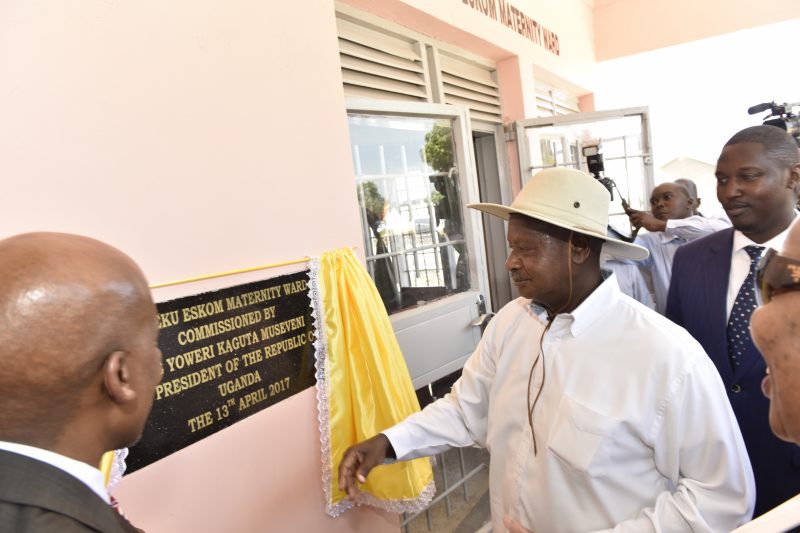 The President also encouraged the people to learn prioritization of their production programmes. He revealed that the government is currently focusing on constructing oil roads through to Tanzania so that project of building the oil pipeline is accorded the support it requires. He further disclosed that the government has already allocated US$500 million so that the country is able to gain from the oil resource by 2020.

Mr. Museveni also cautioned those people who are practicing bad fishing habits that involve catching immature fish and promised to deal with them accordingly. He promised the people of Busoga that he would look into their proposition of constructing a branch of Makerere University in Jinja and that the Government will make an investigation into land disputes involving wananchi and the Army with regard to the area on which to establish a market.

In a few remarks, Hon. Balyeku disclosed that the reason he had chosen to work with Eskom was because of their nationalism and patriotism. He added that the company does well by training and employing Ugandans.

He reported that the new maternity ward facility will offer free maternal services adding that his main concern will entail ensuring that the facility is maintained properly.

The Managing Director of Eskom, Thozama Gangi, said the company’s response to help with the construction of the maternity ward facility was their complementary role to government activities. He urged the local community to ensure the maintenance of the facility.