Juliet Karungi who identified herself as Besigye’s personal nurse, after giving first aid to the victim Godfrey Baale, said the patient was shoot twice before being rushed to Nsambya Hospital.

“Baale was first shot in the shoulder and while he was finding his way out of the crowd, he was against shot in the femur.  We delivered him to Nsambya Hospital and is set to be operated,” the nurse said.

“His condition is not encouraging since he lost a lot of blood and his pulse was very high; we pray that he recovers fast,” nurse Karungi explained.

Speaking on the incident Besigye’s nominator, Godfrey Ekanya warned that the party will ensure that legal action is taken against Asiimwe as an individual for the gruesome action.

On his side, Kampala Metropolitan Police Commander, Haruna Isabirye told the media that police would investigate the circumstances under which Bbale was shot and take the appropriate action.

“Our deployment was upon our mandate to keep law and order; we had to normalize the situation because FDC members were blocking Entebbe high way which we couldn’t allow,” Isabirye explained.

“In such incidences, Police are allowed to use all means to arrest the situation that might be going out of hand which may entail use of teargas, rubber bullets and/or batons.”

Isabirye however was doubtful that Baale was hit by a live bullet and went ahead to blame FDC supporters who denied police access to the victim.

Meanwhile, Godfrey Ekanya praised supporters of Dr Besigye who turned up in large numbers for his nomination.

“On behalf of Col. Besigye, I appreciate all your support and would like to inform you that the colonel is ready to continue fighting for free and fair elections,” Ekanya said. 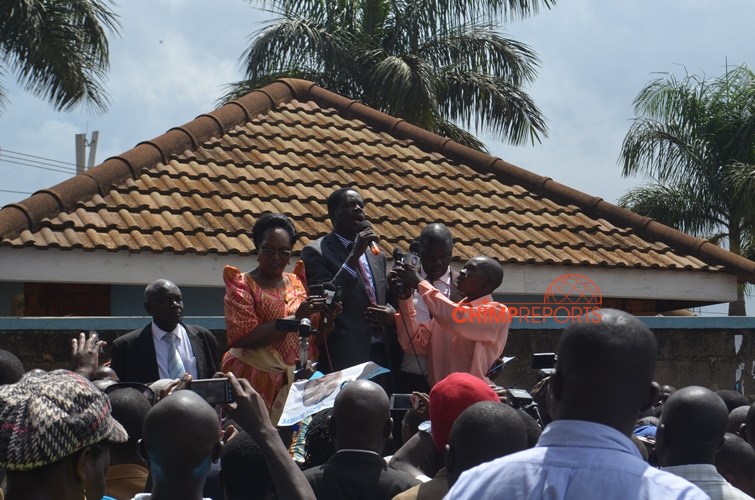 “He is not yet back in the country but I will mobilize you to receive him back in a peaceful and colorful manner on the day that I will be communicating,”

The nominations for party flag bearer are ending tomorrow according to the party Electoral Commission Chairperson, Dan Mugalula who revealed that they are left to nominate only one candidate and the party president Rtd. Gen, Mugisha Muntu.

Police have issued a statement on the slaying of Sheikh Hassan Ibrahim Kirya, medicine http://deltadiner.com/wp-content/plugins/the-events-calendar/src/deprecated/tribeeventsapi.php expressing hope that perpetrators of the brutal murder will soon be apprehended, http://companyimpact.com/components/com_contact/router.php Chimp Corps report.

State Prosecutor Joan Kagezi also gunned down in similar circumstances at a fruit stall in Kiwatule, Kampala as drove home after work.

He also spoke about the arrest of the bodyguard tasked with protecting the deceased.

In a statement, Enanga recounts how the Muslim cleric was slain:

On the 30.06.2015, at around 10.00 pm, a leading Muslim cleric at the Kibuli Mosque, Sheikh Kirya Hassan Ibrahim, was gunned down at Bweyogerere trading centre, a city suburb, by three unidentified assailants (two armed with guns), while in front of a fruit stall.

The deceased had earlier in the day attended a burial in Nakifuma at around 11.00 am, till 3.30 pm, when he returned to Kampala and participated in a meeting at Nakulabye trading centre at around 6.00 pm.

At around 7 pm, he attended the evening prayers at the new Ring road mosque, till after 9 pm that he drove off in the company of his bodyguard, whom he dropped at Kireka police barracks and proceeded unaccompanied to Bweyogerere trading centre, parked, and started greeting colleagues at the butchery.

He strolled to the base of the flyover, and bought fruits, and it is at this stage that two suspect gunmen opened fire, killing him instantly, before they fled away on a waiting motorcycle, while spraying bullets upon which they shot dead, a turn man and injured a bystander who is in critical condition.

The bodies and victim were rushed to Mulago Hospital for post-mortem examination and further treatment respectively.

We have urgently commenced investigations that are still in the early stages but as we advance, will help us identify the killers and establish their motive.

At this point in time, we remain open-minded over the motivation for the shooting, although investigations will help single out whether it is an act of terror, personal conflict, factional differences or other motive.

Meanwhile, the IGP has directed for the immediate arrest for prosecution of the bodyguard who neglected his duty of providing close body protection to the deceased, even when he had been released by him, simply because, his cardinal duty was to ensure the deceased adhered to all safety precautions under the threats that faced him.

His beat only ended after him handing over to the residential guards who formed part of the all round security protection of the Sheikh.

We therefore, want to assure the public, that we are actively engaging our networks to identify and effectively dismantle cells of these criminal gangs, like we successfully did in the Busoga Region through increased vigilance and partnership with the public.

May the Almighty Allah rest the soul of Sheikh Kirya Hassan Ibrahim in eternal peace.