Over 87 students at Ndejje University are at risk of missing graduation on October 12 as the institution fights with its affiliate, Metropolitan International University (MIU), over payment of graduation fees and other outstanding balances.

In 2016, Ndejje University entered into a three-year partnership with the Kisoro-based MIU that would see students study from the latter and the graduate at the former. At the time, MIU was seeking accreditation from the National Council for Higher Education (NCHE).

When the students completed their three-year courses, they cleared the Shs543,000 required to graduate which MIU claims was deposited on the Ndejje University account in September.

However, Ndejje University insists MIU still owes them money and the students will not be allowed to graduate.

Prof Eriabu Lugujjo, the Vice Chancellor of Ndejje University, said all 87 students will not graduate unless the management of Metropolitan International University fulfills their financial obligations.

“We have not included those students on the graduation list because their university has not paid Ndejje University, so their students will not graduate until they clear all their debts with our university,” Prof Lugujjo said in an interview on Monday.

However, the Principal of the Metropolitan International University, Mr Deogratius Ariyo, insisted they paid the money as per the memorandum of understanding and the students should be allowed to graduate.

They have since dragged Ndejje University to court over breach of contract.

“We signed the memorandum of understanding with Ndejje University for three years which was supposed to run from 2016 -2018 and this was our last bunch to graduate but Ndejje University has breached the contract by refusing our students from graduating on this coming Friday 12th /Oct/ 2018,” he said.

“And that’s the reason why we have dragged them to court and our lawyer has served them the intention to sue letter to change their mind and put back our students on the graduation list,” he added.

Mr Ariyo said the students paid all their graduation money on Ndejje University account and they all cleared by September 14th 2018, which means they all students are eligible to graduate because they cleared everything.

“All the 87 students, who have been affected by the above problem paid their money on Ndejje University account No. 3100010135 held in centenary bank and each student deposited Shs 543,000 and they all cleared to zero balance and right now the work is with Ndejje university to verify the money paid on their account and then our students results, which we submitted, to allow them graduate,” he added.

The affected students have also dragged both Ndejje University and Metropolitan International University to court to see that they graduate on Friday.

However, Prof Lugujjo poured scorn on the threats to sue the university.

“Ndejje University is a chattered university not a provisional one like these other universities, so if they don’t pay, their students will not graduate and let them stop using politics because the time for politics will not work here,” he said.

“Our Academic registrar wrote to them on the 5th of September 2018 and asked them to submit their things to senate and up to now they have not submitted anything and how can they graduate when they have not been cleared by senate. Those people are just playing hide and seek and that man is a cheat so let him clear the university and then we shall allow their students to graduate,” he added. 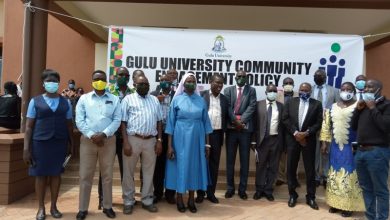