President Yoweri Museveni has concluded his three-day visits to Ethiopia in the Horn of Africa where he held meeting with the leaders,  signed a MoU and toured some of their infrastructures.

Museveni had an excursion the Gibe 111 hydro-electric power station that is under construction in Gibe district in Southern Ethiopia along River Omo.

He commended the Italian-based Salini contractors, for the exemplary construction works that the company has performed in the building of electricity generating dams both in Uganda and Ethiopia.

The President, who was accompanied by the First Lady Mrs. Janet Museveni, made the tour as part of his three-day State Visit to Ethiopia at the invitation of the Ethiopian Premier Mr. Hailemariam Desalegn. 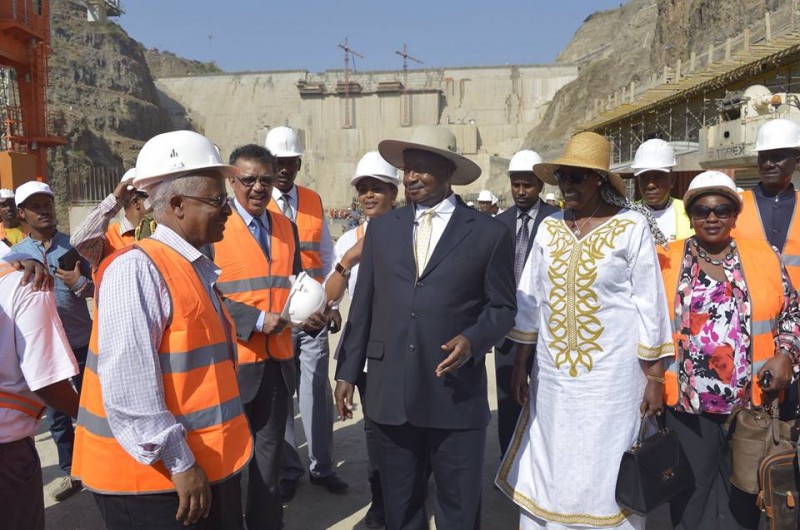 The President was accompanied by State Ministers of Energy, Mr. Simon D’Ujanga and of International Affairs, Mr. Henry Okello Oryem. The new dam, which is slated to have the first turbine commissioned in June 2015, is programmed to generate 1,870 megawatts of electricity.

“I salute Salini Construction Company for doing an exemplary job of dam construction in Uganda. I am happy that they are the ones constructing dams in Ethiopia,” he said. He observed that the Italian registered company had done a good job until some character, with motives of stealing, attempted to frustrate it without sound reason.

Ms. Asnake further revealed that the Ethiopian Government is committed to generating 10,000 megawatts in 2015 adding that the country currently supplies electricity to Djibouti and to the Sudan. She disclosed that an electric power line to transmit electricity to Kenya is under construction.