The project that has been ongoing for the last 6 years consists of the manufacturing and assembling of military Nyoka 4×4 mine and ballistic protected vehicles in Uganda as a cost effective option for urban and rural operations by the Uganda People’s Defence Forces (UPDF).

A South African company known as Impala Services and Logistics, which got a contract with the Ministry of Defence to start the manufacturing and assembling of the vehicles, is at the helm of the project.

The idea of assembling Nyoka armored vehicles followed the end of production of Mambas by the South African company.

“The late Gen. Aronda Nyakayirima came to me and told me that the South African company had ceased production of the Mambas. I told him that we should instead adopt the technology,” Museveni said.

“Ugandans had slept for so long but now they are waking up; these things are easy for the educated population of Ugandans, this is simple Physics and Chemistry,” Museveni said.

“These vehicles are made from steel which you have here and very soon a factory in Tororo will be making new steel from iron ore; we shall look into the economies of making iron steel here as opposed to buying from Sweden.”

“Since you are getting out of sleep, the sky is the limit, thanks for overcoming the psychological barrier of helplessness, this is just the beginning, you can do more.”

President Museveni further  saluted the UPDF for exhibiting self-reliance, a quality that all Africans need.

“Africans have slept for the last 500 years. It is a long time and I am very glad to see that you are waking up a little bit and I am here to congratulate you. What is crucial is overcoming the psychological barrier of helplessness. This is just the beginning. You can do much more,” he said.

He also called for integrated industries adding that this would help create jobs and save money for the country. He thanked Impala Services and Logistics for having partnered with the UPDF and for positively using technology to build improved military vehicles.

“I am very grateful to the CEO of Impala. He was a cadre of the ANC and joined the South African Army but later retired. His partnering with us is ideological,” he noted. 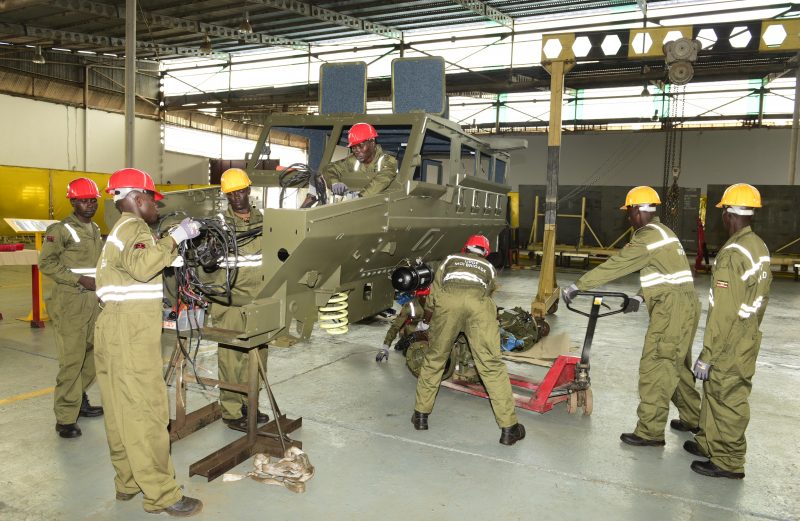 The Chief of the Defense Forces, Gen. David Muhoozi thanked the President for his guidance on the importance of capacity building and self-reliance. He said that through the project, the UPDF has acquired skills, knowledge, technological transfer and procured industrial equipment for manufacturing.