The people of Ankole, western Uganda, have rejected the decision of Mbarara District administration to replace the famous long-horned bull statue at Mbarara-Masaka roundabout with an artificial lighting system.

Mbarara Municipality Mayor Robert Mugabe Kakyebezi recently unveiled plans to design a new and befitting statue for the town which has used the symbol of a bull to represent the nomadic culture of the people of the area.

The old statue’s features such as horns and legs were broken hence distorting its shape – a situation that prompted locals to pile pressure on authorities to act.

“We are looking for a talented artist to work on this project immediately,” said Kakyebezi in June 2018.

But the people of Mbarara were shocked on Monday when an artificial lighting system was erected at the roundabout to replace the bull statue.

This elicited heated responses from the public.

A one Jacob Katumusiime said he didn’t know whether to “cry” or “wail.”

Kamusiime expressed his sadness on Facebook: “So, the cow we grew up treasuring, the cow that hosts our childhood histories – with all the “nshanga aha’mahembe g’ente (let’s meet at the cow statue) memories – is no longer visible. Its invisibility invisibilises our histories too! It is around that same spot that I saw, with my innocent eyes, Col. Muammar Gaddafi in 2001. Hati mbwenu abaana bangye ndabatebezaki? (What stories will I narrate to my kids?”

In Ankole, cattle were the most treasured possession in their lives; providing milk, ghee, beef and hides, cows were the state of the value and a medium of exchange.

Cows were the mode of payment of bride price and some special cows were used in religious rituals as well as cultural and political ceremonies.

The long horned Ankole cows were most valued because they were adapted to the climate of the region and resistant to most diseases. A cow was appreciated for the amount of milk it yielded: for its size and stature; its body color; and for the shape and whiteness of its long horns, as well as its ancestry.

A one James Keitirima observed: “Lights, lights, lights?? We are not grasshopper traders.”

Some active social media users have since started a campaign dubbed “Restore Rusiina” to pressure authorities to remove the artificial lighting system. 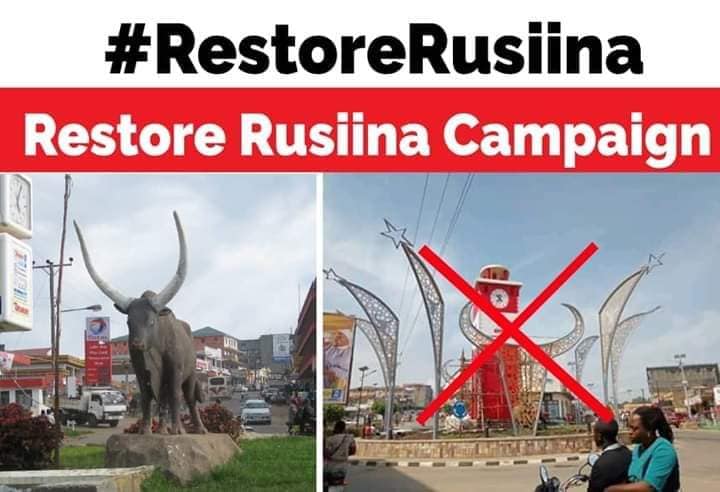 However, a one Charity said Mbarara administration’s decision should be appreciated.

“I honestly think it deserves the credit. The design might not be liked by everybody but surely there is also something to like about this statute,” she said.

Kakyebezi was not readily available for comment on Tuesday.

But a senior official, who chose not to be quoted, said the “design of the cow statue was poorly done. We are doing something about it.”

The cow is one of the three features on Mbarara district’s logo.

The shield signifies the traditional authority of the people of Mbarara to defend their area.

The shield is flanked on the right and left by banana and coffee, the two main cash crops of Mbarara district.