Makerere University Guild leadership has called students for an “extraordinary assembly” to “determine on whether the peaceful demonstration must continue or be suspended.”

The meeting of students will be held in the Freedom Square at the university.

The guild said in a statement on Sunday that it hopes the administration will have committed in writing it’s decision to abide by the parliamentary resolutions on the tuition increment policy.

Parliament recommended that Government halts any fees increment at the university until a sustained remedy to financing the university is established by all stakeholders.

The House further asked government to table a supplementary budget to cater for budgetary deficits at Makerere until a sustainable financing is arrived at.

The strike over the tuition increment policy has since sent shockwaves in Uganda security circles. 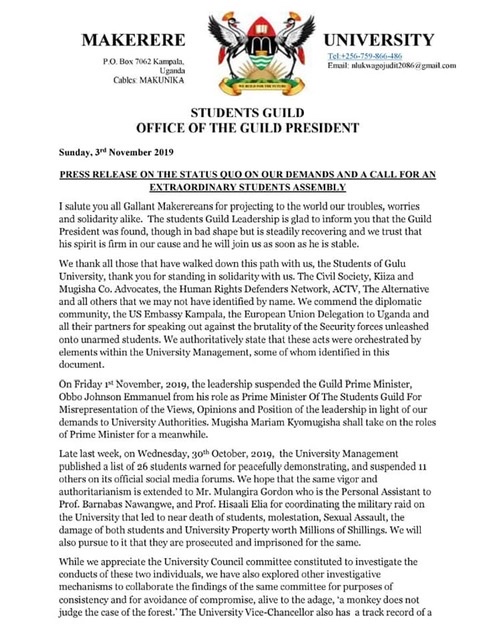 To deescalate the tensions, Makerere University Council resolved that the “15% adjustment shall not apply to functional fees” for the remaining period of implementation of the fees structure adopted in 2018.

It said functional fees shall be capped at the rate applied on the admission cohort of 2019/20 academic year for the next three years.

However, the Council agreed that the “15% adjustment shall continue to be applied on tuition fees for the remaining period of three years.”

The students’ statement today underscores their commitment to continue striking until the tuition increment policy is dropped.

Students also had grievances such as inefficiency in the registration and issuance of identity cards which the council agreed to probe.