Uganda is working around the clock to build the much-anticipated Standard Gauge Railway (SGR) which will boast a modern, high-capacity railway system that is efficient, reliable, safe and affordable for both freight and passengers.

The SGR is being implemented as a regional project with partner states including Kenya, Rwanda and South Sudan.

The countries agreed to use a uniform Standard Specification but each county will construct their sections. The network will stretch from Mombasa through Nairobi to Kampala, Kigali and Juba.

However, the cost of the railway line remains a matter of concern considering Uganda’s high debt burden.

The consultant estimate without locomotives and rolling stock was USD2.4 billion for an electrified railway system and USD2.0 billion for diesel system.

The contract price for the same electrified route based on the Chinese standards was negotiated to USD 2.04 billion without rolling stock and locomotives. 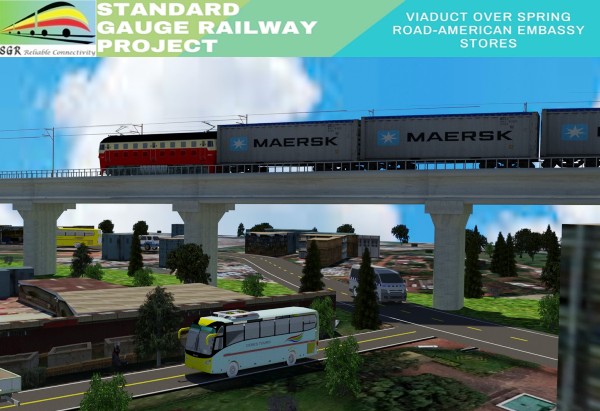 The SGR will have capacity of 8640 containers (if 40 SGR trains per day, each train carrying 216 containers) per day with a transit time (Mombasa-Kampala) of 24 hours.

Officials say SGR is not only reducing Uganda’s carbon footprint but also positioning Uganda to tap into the $78tn global economy.

ChimpBusiness this week caught up with SGR Uganda Coordinator Eng Kasingye Kyamugambi for an update on the implementation of the project.

ChimpBusiness: What is the way forward for Uganda after Rwanda and Tanzania signed a railway construction deal?

KK: For Uganda we continue to develop the railway in line with the Northern Corridor Integrated Projects (NCIP) protocol that includes the four member states of Uganda, Kenya, Rwanda and South Sudan.

But it is important to note that all the routes fall under the East African Railway Master Plan. East Africa requires a railway network that can help improve its competitiveness, stimulate industrialization and improve the economy.

These routes are necessary to complement each other because transport needs a network.

ChimpBusiness: Could you please share an update on the progress of SGR construction in Uganda?

KK: We have acquired and fully paid for 101KM of land in Tororo, Butaleja, Namutumba, Luuka and parts if Iganga. Resettlement Action Plan is complete up to Kampala.

That means once the valuation reports are approved and resources are availed, the project can pay in the shortest time possible.

Major pre-construction activities are either complete or underway including relocation of utilities like NWSC, UETCL lines among others.

ChimpBusiness: What are the challenges faced in the implementation of the railway line?

KK: Physical planning that necessitates relocation of several utilities like NWSC infrastructure is a major problem.

The other challenge is around land acquisition because of the multiple ownership, slow court resolution processes and the extensive encroachment on forests and wetlands.

ChimpBusiness: When does Uganda expect to obtain financing for the project?

KK: Negotiations are in high gear and the Uganda team is preparing to travel to China with a team from Kenya for joint negotiations soon.

Also, a consultancy team from the Exim Bank of China was here in September 2017 to appraise the project, which is a major step towards financial conclusion.

ChimpBusiness: How important is the standard gauge railway to the Ugandan economy?

KK: The standard gauge is a transformational project. By constructing a reliable, efficient and safe railway transport system that attracts world class investors, the SGR will help Uganda integrate and tap into the regional and world economy and trade which today stands at about USD78trillion.

It will also make Uganda a more competitive destination for investors by reducing the travel times from Mombasa to Kampala from current seven days by road or 10-14 days by Metre Gauge Railway to one day.

Finally it will reduce the road wear and tear and the maintenance costs by shifting over 70 percent of export/import cargo from road to rail.

ChimpBusiness: How do you respond to claims that Kenya is not willing to fund the Kisumu-Malaba route?

KK: The joint communique issued by the two heads of state President Yoweri Museveni and Uhuru Kenyatta in December 2017 stated that the two countries would work together to fasttrack the development of the railway. Kenya is committed to its section of the railway. We should not doubt Kenya’s commitment.

ChimpBusiness: When do you expect the project to commence?

KK: The project is already ongoing with major pre-construction undertakings as stated above, but actual construction will commence as soon as we secure financing which should be soon.

ChimpBusiness: How will the financing for the railway line be repaid considering Uganda’s increased debt burden?

KK: This has already been planned for. A railway levy was instituted under the EAC charging 1.5 percent of all imports.

ChimpBusiness: How will the railway unlock other sectors of the economy?

KK: We expect the railway to provide world class, quality transport services that will help Uganda attract world class investors/ manufacturers and this will lead to the stimulation of the industrial sector subsequently improving employment and income.

Secondly, it will help in improving the exports of Uganda to the outside world thus helping the agriculture, mining, tourism and other sectors of the economy. It will also improve the interconnectivity between Mombasa, Nairobi and Kampala.

ChimpBusiness: Where will the line pass?

ChimpBusiness: Are local Ugandans prepared to benefit from the construction phase?

KK: Ugandans are well trained and so we don’t see a shortfall of skills.

Secondly, we emphasize capacity building in various thirdly and several teams have had skills enhancement around railway works.

Thirdly as far as supply is concerned, we are working with private sector giving them our standards and explaining to them what we expect from them.

ChimpBusiness: What are the existing opportunities for Ugandans as the country prepares for the construction phase?

KK: There will be huge opportunities under the local content provision.

Over 10 sectors will directly benefit from the project among them equipment hire, security, financial, clearing and forwarding, sub-contracting, labour and materials among others.

We are targeting that out of every ten jobs, nine will be Ugandans.

ChimpBusiness: How many jobs will the construction phase create?

KK: Overall we estimate about 100,000 people will be employed directly and indirectly. But at the peak of construction, we expect to employ 40,000 people.

ChimpBusiness: How will the railway line be maintained?

KK: We have a clear operation and maintenance framework. It is important to note that we agreed with Kenya on a seamless operation of the railway.

ChimpBusiness: Does the railway line give us a competitive advantage in the region?

Currently Uganda imports more goods from other countries than the regional countries. The competition is global than regional.

Competiveness is about attracting investors from other countries to produce high quality affordable goods and services.