Minister of Foreign Affairs Sam Kutesa on Friday paid a visit to the South African high Commission in Kampala to sign the Official Condolence Book following the death of Mrs. Winnie Madikizela Mandela.

In his condolence message, Kutesa described Winnie Madikizela as “one of Africa’s greatest heroines” because of “her invaluable contribution to the fight against Apartheid, colonialism and injustice.”

The Foreign affairs Minister added that Madikizela’s determination and resilience filled the vacuum created by the imprisonment of the late President Nelson Mandela and other top leaders of the African National Congress (ANC).

“She was an inspiration to the ANC and many other freedom struggles across Africa,” said Kutesa.

He continued, “Mrs Mandela was also an icon and inspiration to women in Africa and beyond, dedicating her life to important social causes at home and abroad, including the wellbeing of the most vulnerable groups.” 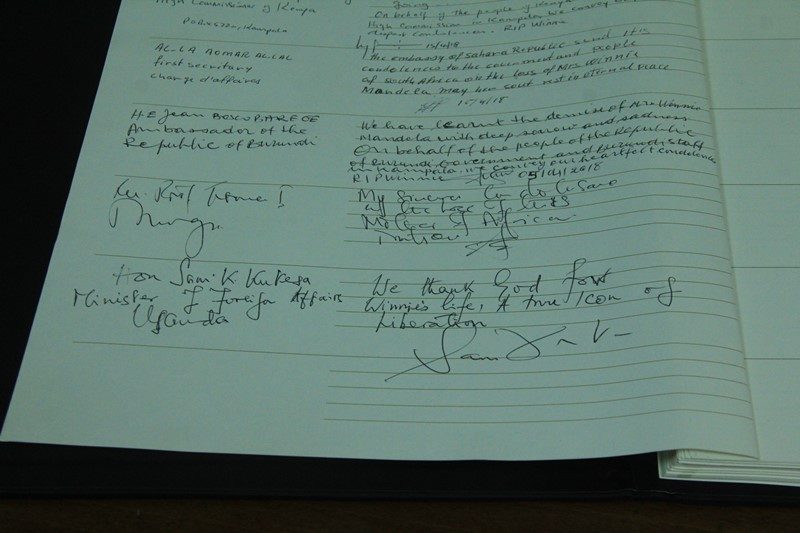 Known as Mama Winnie, and “mother of the nation”, the former wife of Nelson Mandela died on Monday aged 81 following a “long illness”, her family said.

During her nearly 38-year marriage to Mandela, she fought against white-majority rule even as she vowed to escape the shadow of the great man.

The anti-apartheid campaigner will be honoured with a state funeral later this month, according to South Africa’s president Cyril Ramaphosa.