A truck driver who tested positive for COVID19 and has been under treatment at Kabale Regional Referral hospital has finally recovered and has been discharged.

Daudi Noir Abdul, the Kenyan truck driver was last month intercepted at Cyanika border post as he returned from Rwanda and taken to Kabale hospital after testing positive for the contagious Covid 19.

He was first   tested on April 19th at the Malaba border post and was on 21 April intercepted at Cyanika border post in Kisoro and admitted at the referral hospital.

On April 23rd he was tested again and the results came out positive.

But after testing negative twice this week, the hospital today declared him free of the virus and let him go.

Dr Sophie Namasope, the Kabale regional referral hospital director says the patient, who was the first case at the facility is now free.

Dr Namasope also revealed that all his contacts have tested negative. 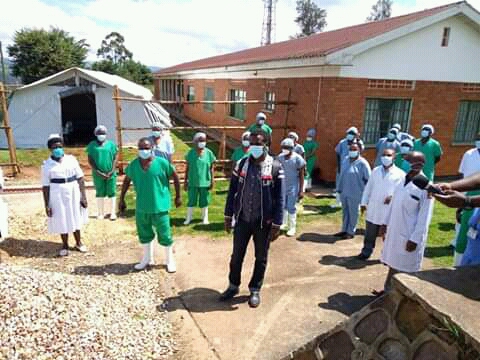 She thanked the district taskforce who helped them in the welfare of the patient being that he is Kenyan he never ate local foods.

Darius Nandinda, the Kabale RDC said the district had been under tension since the patient was admitted.

” Some people begun calling me telling me that he should be taken back to his home country of Kenya but we refused because Kenyans are our brothers,” he said.

The driver on his part, said despite feeling scared upon admission, he felt at home later on because of the good care accorded by the health workers.