President Yoweri Museveni has Saturday evening ordered closure of all the country’s borders, prohibiting any foreign national from coming in.

The President also ordered closure of the country’s airspace, with few exceptions for emergencies and humanitarian work.

As such, no more passenger planes will be permitted to land at any of the country ‘s airports.

This latest unprecedented development is a follow-up on earlier orders on Wednesday this week in which the president shut down all schools and places of worship, and banned all public meetings.

Addressing the nation at State House in Entebbe this evening, Museveni said these measures were partly in response to what he called indiscipline on the part of some passengers that were recently allowed into the country.

During his Wednesday address, Museveni had allowed foreigners coming into Uganda including those from the so-called Category 1 Countries which have the highest number of coronavirus cases.

These were to undergo mandatory quarantine.

But according to Museveni, this window was abused by some of the passengers that flouted the quarantine rules.

There have been numerous reports of people escaping from their mandatory quarantine hotels, while ministry of health says even those that have been completing self isolation have been leaving their houses and going to open places like supermarkets.

“Partly due to indiscipline of some of those people, we have reviewed that and tightened the preventive measures,” Museveni said.

As per the new directives, Museveni said all incoming passengers whether by air or land or water are now prohibited.

“To actualize this, we have decided to prohibit all passenger planes coming from outside Uganda from landing at any of the airports in Uganda. Only cargo planes will be allowed to fly into and out of Uganda,” he said.

“Also to be allowed in are planes on account of emergency or UN planes in relief work and other UN works. The crews of these planes will be accommodated in locations agreed with concerned authorities”

The ban on air transport, Museveni said, will take effect starting tomorrow at midnight, which is more than 24 hours that is required by international laws.

In the meantime, Domestic flights will continue, but this might also be reviewed according to the president, because some of the passengers are congested and share the same air.

All Ugandan borders are going into lock down, with nobody allowed in, Museveni ordered.

“Pending the evolving of an East African health plan to the pandemic by the regional minister of health ministers, no person, Ugandan or otherwise will be allowed to enter Uganda by land or water except for the drivers and accompanying crews not exceeding 3 for cargo transport vehicles like trailers and lorries.”

“No buses, minibuses, no saloon cars or bodaboda will be allowed in the country. Also pedestrians or people riding on bicycles will not be allowed to enter Uganda.” 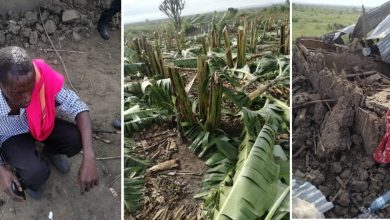