This locked out thousands of Ugandans who had traveled abroad.

There was hope that this situation was temporary.

However, two months later, the situation was unbearable with Ugandans surviving on alms in foreign countries.

One of the affected persons was Peter W. Songa whose wife, Ida Chella Songa, a Ugandan, was stranded in Zambia.

He said his wife was stranded and urgently needed all forms of assistance to help her return to Uganda.

Just like most Ugandans who were stranded across the world, Peter was worried and restless.

However, Peter says the Ugandan Commission in Dar es Salaam regularly sent communication, updating him on the process of assisting Ugandans stranded abroad.

The Ugandan diplomats in Dar es Salaam liaised with their counterparts in South Africa to facilitate the rescue of Ugandans in Zambia including Ida Chella Songa.

“On 5th May 2020, I brought to the attention of your esteemed office my wife’s case as a stranded Ugandan citizen in Zambia, her native county, following the declaration of the COVID-19 lockdown and closure of Ugandan airports and borders,” said Peter.

“As I write now, the evacuation of Mrs Ida Chella Songa was accomplished last evening when the Uganda Airlines flight, originating from Johannesburg and passing through Lusaka, arrived at Entebbe at 8.15pm. She is now safely in quarantine!” he added.

75 Ugandan Nationals and legal residents who were stranded in the Southern Africa region of South Africa and Zambia following closure of Entebbe International Airport to passenger flights on 22 March returned to Uganda on August 10.

This was the second repatriation exercise undertaken with the first having taken place on 2 July 2020 that saw a total of 62 Ugandans and legal residents safely return home.

The categories of people aboard the August 10 flight included students, government officials, business people, medical doctors, and others who had traveled to the Southern Africa and Zambia for various reasons were also on board.

Peter could not hide his excitement.

“On behalf of my wife and our children: Godfrey, Andrew, Philip and Martha, named respectively in order of birth, I thank all the staff of the Uganda High Commission involved (Tanzania), for the dedicated, selfless and efficient way they handled all the intricate issues concerning the evacuation,” said Peter.

“As a family we came to greatly appreciate the spirit in which you assisted us, as we are sure you did for all the families who faced the same unique situation. Above all, we came to associate ourselves closely with the endearing term “Beloved” (with its scriptural connotations, apart from serving as a collective, loving, comforting, and empathetic term for encouraging those in distress),” he added.

“In turn, each time there was communication from your esteemed office, my wife would inform us that “Beloved” had communicated something for our attention. May God bless you “Beloved”!” 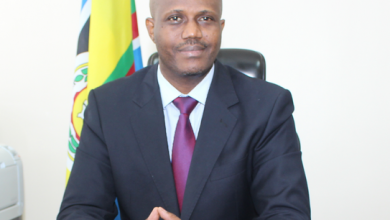