Due to changes in weather patterns that demand adjustments in vanilla harvest dates, Government has established that the timing for harvesting the next season’s vanilla fall between late June and mid July 2020.

Speaking to reporters at Uganda Media Center, the Minister of State for Agriculture Aggrey Bagiire said farmers who are caught harvesting vanilla before the harvesting dates will be apprehended.

Similarly, the Minister warned any traders who would be found in possession of unripe vanilla beans that they will be dealt with.

“On behalf of my Ministry, I hereby declare that harvesting of vanilla for season A shall start on July 6th 2020 through July 30th 2020. During the exercise, farmers are required to pick only mature ripe beans and any trader found in possession of unripe beans will be dealt with by Government,” he said.

Bagiire therefore directed his Ministry officials and Agriculture Police to work closely with other actors to ensure effective implementation of the directive.

The Ministry of Agriculture on 21st May and 14th November 2019 made national declaration of vanilla harvest dates with the aim of reducing premature harvests, curbing theft, improving handling and processing practices to ensure high quality vanilla is exported out of Uganda.

Bagiire said a positive impact on the image of Uganda’s vanilla industry and improved vanilla quality of Ugandan vanilla have been observed on the market.

Despite the achievement, he said reports of premature vanilla harvests have been received.

“It is indeed disheartening to hear that inspite of testimonies we are getting from the market, we have started getting reports of premature harvests mostly fueled by dodgy middlemen,” he said.

He added that on May 13th 2020, security officers intercepted a truck of poor quality, curved vanilla in Mukono which had arrived from Kasese which was picked prematurely, about 3 or 4 months after pollination.

A sample, Bagiire said was taken to chemiphar laboratories for analysis and it turned out that the vanilla content was only 0.2%, the lowest ever.

“If such vanilla is exported, no matter where it goes, it will paint a bad image about Uganda. This is unacceptable and must stop with immediate effect,” he said. 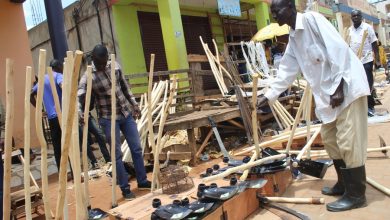