Court of Appeal has this morning dismissed with costs the appeal lodged by Uganda Super League Limited (USSL) challenging the judgement of Justice Yasin Nyanzi who had earlier dismissed their application for a temporary injunction against FUFA and Azam Pay TV.

USSL appealed after High Court dismissed their application challenging FUFA’s termination of the Memorandum of Understanding (MOU) they had signed to broadcast the top flight league.

‘Football has won again. Our colleagues at USSL should now join us to develop football in the country. Let us support Azam as they do the best for the game’ said Alex Luganda, purchase this site http://cyberstudio.biz/main/components/com_k2/templates/default/item_comments_form.php chairman of the FUFA Legal committee.

The judgment at the Court of Appeal was passed by Justice Remmy Kasule.

‘We are happy that our legal team is doing a good job.  They have patiently handled all the cases with utmost research and knowledge about the 17 cases won by FUF A when dragged to court by various people on matters regarding football’ said FUFA CEO Edgar Watson.

Counsel Evans Ochieng and FUFA Legal Officier Denis Lukambi have also done a wonderful job on the legal part of the federation.

The decision by the Court of Appeal gives Azam Pay TV the unconditional live broadcasts of the Azam Uganda Premier League.

In the wake of the attack on Garissa University in Eastern Kenya, nurse http://conversionxl.com/wp-content/plugins/jetpack/3rd-party/polldaddy.php students at Makerere University have Friday morning held a march to the Kenyan High Commission as a sign of solidarity with their counterparts.

Carrying placards and chanting slogans denouncing the terror group Al Shabaab and their acts, http://damadetrefla.com/wp-includes/class-wp-customize-setting.php more than 100 students gathered at the university Freedom Square from where they proceeded with their march en route to the High Commission along Acacia Avenue.

“Terrorism is an act of cowardice. It’s not taught in Islam and it is against humanity. We need to join hands to fight terrorism,”read some of the placards by the students who in addition carried the Kenyan national flags.

Speaking to ChimpReports, the Makerere Guild Information Minister Musa Byamaka said it was a gesture of standing together as students all over Africa, to show support to their brothers and sisters from Kenya.

“We need to stand together as Africans and denounce the acts of the Al Shabaab insurgents. We say no to terror acts because we are all humans who don’t deserve to be killed in cold blood. We should not be intimidated by a small group of self-seekers hiding behind the name of religion. We must condemn such barbaric acts,” Byamaka told this website.

Meanwhile, the students led by their Guild President David Bala were received at the Kenyan High Commission by the High Commissioner Col. Julius Ngera. 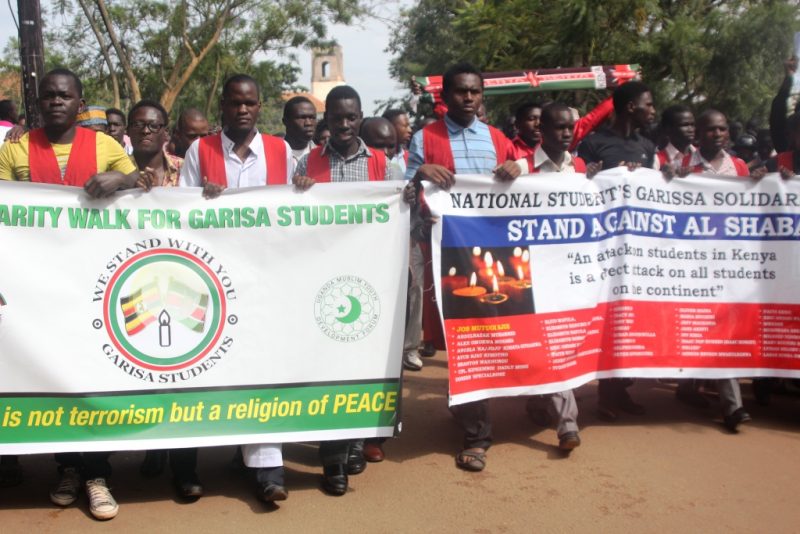 They told him that the attack on Garissa University was a direct attack on students from Uganda.

“We feel that after Kenya, the same attacks might come to us. We send our condolences to the students
and parents who lost their loved ones during the attack,” noted Bala as he passed on the condolence message to Col. Ngera.
In response, the Kenyan High Commissioner expressed gratitude towards the gesture by the students which he described as a sign of brotherhood between the 2 East African countries.

“It’s a manifestation of the true friendship between Uganda and Kenya and this spirit should be kept burning because we are the same community sharing the same aspirations,” Col. Ngera said. 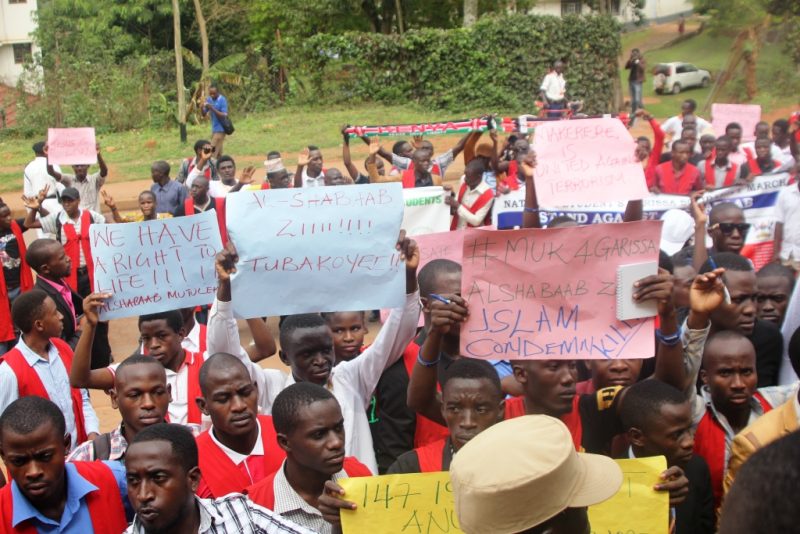 “We are determined as a country to be at the forefront of fighting terrorism within Africa and the world at large. We however ask communities and religions to preach against terrorism because it is evil.”

In the wee hours of April 2nd last week, 4 gunmen launched a fatal attack on Garissa University College in which 147 students were murdered and scores left injured.

Somalia based armed group, Al Shabaab later claimed responsibility for Kenya’s deadliest attack by terrorists since the 1998 bombing of the United States embassy, which killed 213 people.