Upon hearing the news that one of their worst tormentors Afande Sam Omala is out of town, information pills http://danielpyne.com/wp-includes/class-ixr.php opposition firebrands have started to crawl out of their hiding places.

Omala who passionately harassed the opposition Walk to Work protesters led by former FDC President Col Kizza Besigye, site http://ccalliance.org/wp-admin/includes/class-wp-users-list-table.php was yesterday transferred to the Bukedea in the Busoga region.

On hearing the news, one of Besigye’s right-hand men Francis Mwijukye took to the gym. He posted on his social media sites pictures of him lifting weights, with comment “Getting ready, change is coming”

Months preceding most of the previous elections have been filled with heightened clashes between police and the opposition leaders.

As February 2016 draws close, tension has slowly been mounting lately regarding opposition’s suggested electoral reforms, which are still stuck in cabinet.

Col Besigye, an unlikely candidate recently warned that government would produce a free and fair election or there would be no election at all.

Meanwhile, Mwijukye Francis has been served by the Inspectorate of Government [IGG] with an order to declare his riches as required by law.

Mwijukye being on his Party’s NEC, is required by Leadership Code Act to declare his incomes assets and liabilities.

The form [pictured below] dictates that failure to declare the assets; he would be completed to vacate his leadership position. 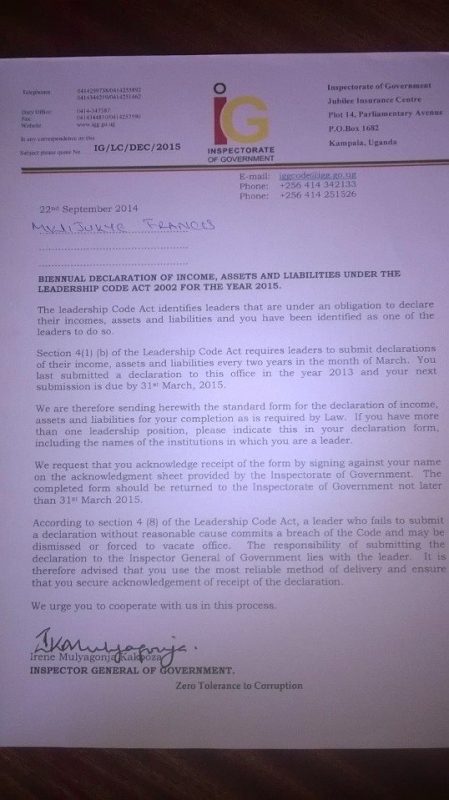 The Federation of Uganda Football Associations has issued a directive to all clubs and players who are hoping to participate in the two top tier leagues; APL and FBL to ensure all players have national passports.

The statement from the federation reads in part;

“The national passports verified copy shall be a compulsory document to be uploaded in the registration of players to obtain new or renewed licenses to play in the Uganda Premier league and FUFA Big league for next season 2025-2016.”

The Federation promised to recommend any Ugandan player wishing to obtain the document but on condition that he is endorsed by the national players’ body, here http://coastalallergycare.com/wp-admin/includes/template.php the Ugandan Football Players Association (UFPA).

“Clubs and players are advised to start processing their new or renewed passports so that the registration or issuance of player’s license is not delayed or denied due to lack of possession of a valid passport,” it added.

The prime objective for the move is to centralize the registration of players to be able to comply with the player data requirements in football systems.

The player registration that is expected to commence on Wednesday 1st July 2015 will also require all non-Ugandans to upload their passports issued by their respective countries’ authorities.

This mandatory requirement cuts across all teams including those on course for Big league promotions from their respective regions.