The see-through dress left heads turning at a social event in Kampala
It is widely thought that journalists across the world are normally shabby.

However, Corps believe this school of thought is slowly being discarded as female journalists and television presenters in Uganda move to define their image with elegance and striking designs.

This television presenter and journalist with a top media house made heads turn as she appeared at a social event in Kampala recently. 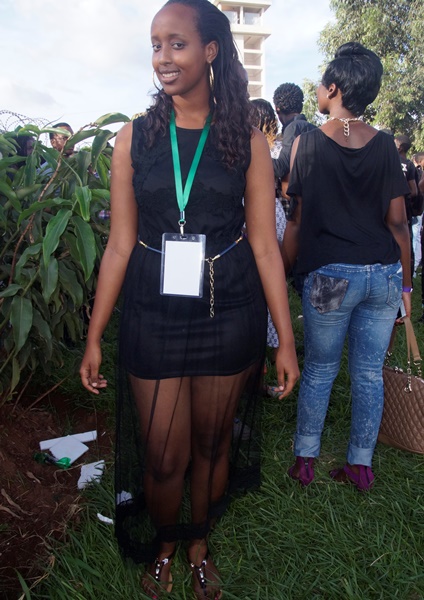 Clad in a black revealing dress and open shoes, the presenter cut a pose of a princess as her golden hair rolled on her back.

With a wide and infectious smile, this beauty could not escape our cameras.

Readers’ Quiz: Can you identify her? Win airtime by telling us her name and workplace.
Opposition Forum for Democratic Change (FDC) is planning to mobilize the population to take over the electoral reforms process in case parliament fails to consider the constitutional amendments that were forward by the opposition and civil society organizations.

This comes at a time when parliament is expected to table the amendments for discussion but with information that the issues that were forwarded by the groups will not appear anywhere on the order paper.

Committee members revealed recently that there was no time to have the opposition proposals adopted in the amendments.

“Despite the Electoral Commission spending a lot of tax payer’s money holding consultations for electoral reforms, prescription http://csautomation.net/wp-content/plugins/woocommerce/includes/emails/class-wc-email-failed-order.php our proposals have been sidelined, http://crmsoftwareblog.com/wp-content/plugins/jetpack/sync/class.jetpack-sync-queue.php ” noted Ibrahim Ssemujju Nganda while addressing a weekly press briefing at the party headquarters in Najjanankumbi.

“We are now going to mobilize the people and ask them to take over the electoral process so as to ensure free and fair exercise, http://curarlaimpotencia.com/wp-admin/includes/class-wp-screen.php ” Ssemujju said.

“We are saddened that police is still being used as an NRM branch to foil campaigns for our presidential aspirants; Col. Besigye was yesterday teargassed in Mbarara while Muntu was intercepted by police in Kabale.”

Ssemujju added that these are some of the issues that were raised in the proposed reforms, calling on police and military to avoid involving in election process in the country.