Rwogamutyarize, alias Rasta, a controversial ‘security operative’ who claimed to have participated in the plot to assassinate former AIGP Andrew Felix Kaweesi, was arrested in the military intelligence raid on ‘safe houses’ ran by Internal Security Organisation (ISO).

The ISO operatives who tried to resist arrest were overpowered by the commandos’ heavy gunfire and subsequently arrested.

ChimpReports has learned that among the arrested ISO operatives include Rwogamutyarize who is commonly known as Rasta.

The defence spokesperson Brig Richard Karemire has since refused to comment on this development.

Rasta hit the limelight when he alleged he was part of the group hired to kill Kaweesi.

However, his confession was disregarded as ‘fictitious’ by a joint security committee formed by president Museveni to investigate the Kaweesi murder.

Rasta had claimed that he rode one of the shooters to Kulambiro where Kaweesi was gunned down.

But during the reconstruction of the crime scene, detectives asked Rasta to show them where Kaweesi was shot from but the operative could hardly locate the area.

Rasta could not locate Kaweesi’s home despite claiming in a statement that he had surveyed the area days before the shooting.

Rasta even failed the test of riding a motorcycle despite saying he was an experienced rider.

He also had claimed having met Kayihura at the office of the Wakiso district Police commander (DPC), only identified as ASP Ssekamanya.

However, the joint investigation team established that Kayihura throughout his term in office never visited Wakiso Police Station.

Yet, call records show the shooting happened at 9:17am as Kaweesi was speaking on phone with Police Counter Terrorism boss, AIGP Abbas Byakagaba.

It remains unclear why Rasta was kept at the ISO facility.

The joint security committee which investigated Kaweesi’s murder had recommended his prosecution for telling lies to police in a high sensitive case.

His confession raised fears that he could have been compromised to provide cover for Kaweesi’s killers.

Sources who preferred anonymity to speak freely said Rasta and other operatives are being interrogated by CMI investigators.

The raid of the ISO facility came at a time of worsening relations between ISO and CMI.

But Security Minister, Gen Elly Tumwiine who supervises ISO has since defended the reign of Kaka Bagyenda, saying attacks against him are politically motivated.

Businessmen including former Movit Products boss Simpson Birungi was held incommunicado at the Kyengera safe house for months despite being released on bond by police. 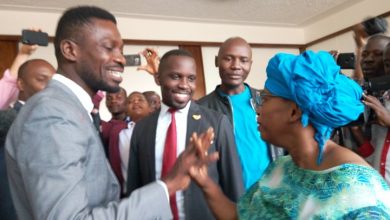