The regional Assembly is urging Partner States to fully implement the Common Market Protocol to allow for free movement of persons, goods and services.

In addition, there is need for enhanced visibility of the regional bloc and for all Partner States to harmonize their national laws to conform to that of the Community.

EALA late yesterday afternoon adopted the report of the sensitization activities undertaken in the Partner States between February 1-6th, 2019, under the theme, “EAC Integration agenda: Accessing the Gains and Assessing the Challenges.”

The objectives of the week-long activity among others, were to sensitize EAC citizens on the overall integration process and promote liaison with EAC National Assemblies and other key stakeholders.

The report presented to the House by Hon George Odongo, further urges all Partner States to remit the contributions in a timely manner and fashion saying that delays and non-remittances have continued to affect the implementation of the EAC integration agenda. The report avers of the existence of trade disputes and disharmony among the Partner States largely regarding access of markets within Partner States.

It among other things, calls for harmonization of custom systems to reduce the cost of doing business, concrete measures geared towards complete elimination of Non-Tariff Barriers (NTBs), which negatively affect regional trade programmes and the establishment of the Committee for Trade and Remedies.

The Committee is expected among other things, to oversee and ensure trade barriers within the region are resolved.

“There is need to institute more practical and binding mechanisms to remove the remaining 20% of NTBs to allow for more trade, which will increase taxes, incomes and other benefits”, the report says in part.

The report also suggests that regular meetings at the borders between the customs departments, revenue authorities and border security personnel should be held frequently. At the same time, it is vital for the business community to be mobilized to dialogue on emerging issues and to resolve the same.

In the quest to ensure sustainability, the Assembly is urging the EAC to consider instituting a more sustainable funding mechanism to include charging an import levy.

The report notes that a 0.01% levy on imports into the region would facilitate the financing of the EAC.  In a bid to ease movement, EALA wants the Partner States’ immigration authorities to harmonize fees of the East African e-passport to make it affordable for all East Africans.

In addition, the adoption of Kiswahili as the region’s official language is considered absolute and EALA says the Partner States’ should integrate Kiswahili in their curricular and ensure adoption of its use in their official communication systems.

The report reveals a number of challenges within the Partner States. In Burundi, the Private Sector reported the application of the single tourist visa among the EAC Partner States was yet to be attained. “This constitutes an obstacle to the development of the tourism sector”, the report said.

In Kenya, residents among other things reported difficulties encountered while attempting to establish and set up businesses in other EAC Partner States, which contravenes the Common Market Protocol and the spirit of the EAC integration.

In Rwanda, the report denotes lack of weighbridges to facilitate the implementation of the EAC Vehicle Load Control Act, 2016 as one of the challenges.

In South Sudan, laws of EAC have not been harmonised according to the report making it difficult for the ministry in charge of regional integration to coordinate and facilitate of activities of integration with other stakeholders in the country. 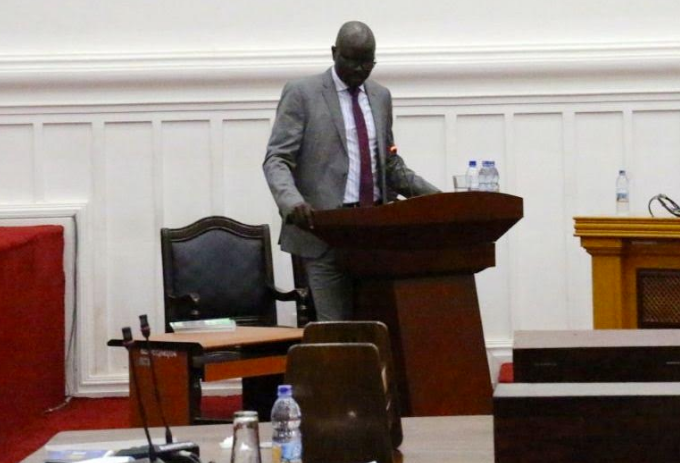 In the United Republic of Tanzania, lack of communication was cited as a major challenge between the Tanzania Port Authorities and other EAC Partner States Revenue Authorities.

In Uganda, the Assembly was informed of the need to harmonise interest rates in the Partner States.  It was pointed out that cheaper credit in other Partner States presented a disadvantage to Ugandan traders especially those trading around the borders.

At debate time, Ngwaru Maghembe said it was important to indoctrinate the youth with the message of integration– to create sufficient awareness.  On the issue raised in Republic of Kenya with regards to obtaining work permits in United Republic of Tanzania, the Member informed the House that government had put in place all processes so that those with all paperwork should be able to have the said permits processed in 1-2 weeks.

Abdulla Makame reiterated the region needed to embrace Kiswahili saying, East Africa was the home of the widely spoken language.  “It is spoken officially in the African Union. Why not here at the EAC”, he posed?

Kasamba Mathias said there was need for more efforts to undertake sensitization and to assess progress of the integration process.

He called for additional work in awareness creation in the Republic of South Sudan which joined the regional bloc in 2016.

The Member who is chair of the Committee on Agriculture, Trade and Natural Resources (ATNR) called for further allocation of resources for the agricultural sector saying increased food security was necessary.

Abdikadir Aden said the founders of EAC were keen to have politicians enhance public participation on matters of integration in order to achieve common understanding of EAC citizens.

He rallied for total and free movement of persons in the region giving examples of the Kenyatta and Kariakor markets which were largely dominated by traders from the United Republic of Tanzania and the Republic of Burundi respectively.  “This is the spirit of the East African Community we want”, he said.

Woda Jeremiah said sensitization should be encouraged as a practice and said citizens were yet to accrue the full benefits of integration.

Leontine Nzeyimana urged the Council of Ministers to implement the recommendations of the reports of the Assembly on the tour of the northern and central corridors as well as that of sensitization.

Jean Claude Barimuyabo said there was need for nationalistic tendencies to be addressed especially when it comes to the issues of work-permits.

The Deputy Minister for EAC in the United Republic of Tanzania, Damas Ndumbaro reiterated the importance of sensitization in the Community and said the Council of Ministers would address the matters raised and bring its feedback to the August House.