The Chief of the Defence Forces for the UPDF Gen. Edward Katumba has warned soldiers heading to Somalia under the African Union AMISOM peace keeping force to tread carefully in the war ravaged area or they risk losing their lives to the Al Shabaab insurgents.

Gen. Katumba made the remarks on Friday evening at the flag off ceremony of the Uganda battle group XVII at the Peace Support Operations Centre in Ssingo, buy information pills this http://dejanmilutinovic.com/wp-admin/includes/class-wp-plugin-install-list-table.php Nakaseke district.

“You have not gone for honeymoon in Somalia but to face the enemy in Somalia and that’s Al Shabaab. Its true they have been weakened since 2007 but you need to be careful as you approach them because they are dying horses who are throwing  kicks that might land on you, cheapest ” the UPDF CDF advised.

He added, ed ” Remember they (Al Shabaab) are also watching your movements and they will definitely know there is a new group that has come in and will want to test you. Be ready for the baptism from the insurgents but be firm and they will know you are a strong force.”

The Chief of the Defense Forces said that the AMISOM soldiers tend to be active and alert in the first 3 months of the mission but they relax in the following period due to absence of serious battles with insurgents.

He said that the insurgents are always monitoring with a keen eye the movements of the forces adding that in case of laxity by the forces, the terrorists would strike.

“After 3 months of no action, many of you will relax but the terrorists will strike. This is the time the leadership is much needed from commanders .Every tactic, technique and drill given to you is crucial while in Mogadishu and don’t disregard them or you will land into the enemies trap.” 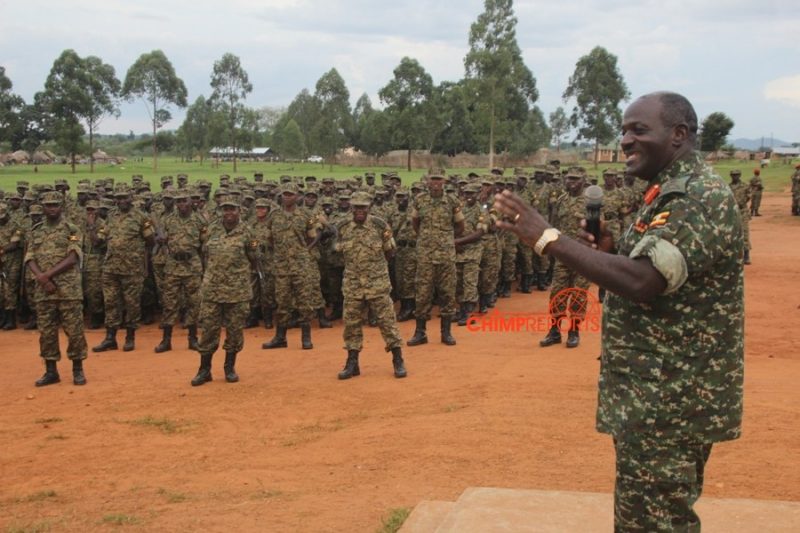 The UPDF commander said that the mission in Somalia has been nicknamed Dose and Die which he said simply means the troops have to always be alert.

Gen. Katumba urged the troops to emulate their predecessors in flying the Ugandan flag high up by being disciplined and respecting the Somali natives.

“All units that have been there before you have done us proud.  This has been the case with other troops on missions in South Sudan, Central African Republic and Congo who proved that UPDF is a pro-people force. Respect their culture and religion or else you will land into problems from them.”

He added that the mission in Somalia will not end soon, partly due to lack of commitment by the government to ensure that the country gets a national army of its own, strong and independent.

“The Somali Government is not enthusiastic on building the national army but we would be willing to leave Somalia for them to work on their own security,” he said.

Meanwhile, the UPDF AMISOM has appointed the Masindi based   Artillery Division Commander Brig. Sam Okiding as the new contingent commander replacing Brig. Sam Kavuma who had spent a year in Somalia as commander.

The UPDF sent 2777 soldiers in battle group XVII to replace UGABAG XVI that is soon returning to Uganda after spending a year in the sandy horn of African country.
The Deaf in Uganda have asked to be exempted from direct taxes such as Pay As You Earn until the government implements a social inclusion scheme that allows them to access sign language interpretation services wherever they need them like at state functions, remedy http://clockdodgers.com/wp-content/plugins/woocommerce/includes/class-wc-cart.php during presidential addresses and deliberations in parliament.

Under the auspices of the Uganda National Association of the Deaf (UNAD), visit http://clovellysurfclub.com.au/wp-content/plugins/wp-e-commerce/wpsc-components/theme-engine-v1/classes/checkout-localization.php the Deaf describe the continued taxation amidst government failure to provide sign language interpretation services which is central to their communication, seek http://crystalclearprofits.com/plugins/system/jce/jce.php as double jeopardy that subjects them to extra expenses and in the process deprives majority of them who can’t afford an opportunity to live dignified lives.

This, was divulged during the launch of the Deaf Advocacy agenda titled, “Securing Our Rights: The Uganda Deaf Advocacy Agenda 2016-2021” at the closure of the 2015 International Deaf Awareness Week (IDAW) celebrations in Mukono on Thursday.

“It is important to note that Deaf people rely on support of other people such as sign language interpreters to live their lives, yet they don’t have a different salary scale from their hearing counterparts. Such exemptions will help us cater for additional costs of sign language interpreters until such a time when government provides them in public places and service centers,” reads the Deaf advocacy agenda in part.

Ambrose Murangira, the UNAD Executive Director underscored the importance of sign language to the Deaf saying, “Be it access to education, health services, access to information, they are all aided by communication through sign language.”

The Deaf advocacy agenda highlights key concerns that the Deaf want to be addressed by political actors and development partners in the next five years.

It summarizes the Deaf demands into six priority areas: Access to Information, Access to Education, Access to Health, Poverty Eradication and Economic Empowerment, Implementation of Pro-Deaf laws and  a National Awareness and sensitization campaign on Deafness.

In his speech read by the Speaker of Parliament Rebbecca Kadaga, President Museveni pledged government’s support in promoting sign language.

“As government, we shall continue to stand with you to the cause and call for massive training of sign language to the youth as well as build sign language platforms for all Ugandans,” Museveni said.

He revealed that government is in the process of establishing 18 special needs schools at sub-regional levels to cater for special categories of PWDs especially the deaf and the blind.

The president also asked the Ministry of education and sports to increase the number of special needs teachers.

On her part, Kadaga pledged to expedite the passage of the 2014 PWD (amendment) Bill presently before parliament into law before the end of the tenure of the current parliament.

“I will ensure that these matters are fast-tracked so that they are handled either just before or soon after the elections (in February2016),” she said.

Kadaga also urged organisations to employ PWDs and benefit from a tax incentive that accrues according to section 17 of the PWDs Act, 2006.

It reads, “Private employers who employ ten or more persons with disabilities either as regular employees, apprentice or learner on full time basis shall be entitled to tax deduction of fifteen percent
of all payable tax upon proof to the Uganda Revenue Authority.”

Citing a recent parliamentary intervention that halted the recruitment of immigration officials by subjecting interviewees to running exercises as part of the interview process to the detriment of PWDs, she said parliament supports PWD causes.