The Uganda Communications Commission (UCC) and telecom company MTN are on a collision path over the commission’s directive to telecom companies to harmonise their three-digit short codes has finally come to an end.

The changes start on Sunday 1st March, side effects http://contentisbae.com/wp-includes/class-wp-simplepie-sanitize-kses.php 2015.

The commission today (Friday, http://choladathaicuisine.com/wp-content/plugins/jetpack/sync/class.jetpack-sync-module-plugins.php 27th) share an MTN Uganda artwork on its social media pages captioned: “?#?MTN_NOTICETo those that were asking for confirmation, http://chancellorinsja.com/wp-includes/functions.php i hope this helps. With effect from Sunday 1st March, 2015, MTN is changing its codes for loading airtime from *155* to *130* and checking airtime balance from *156# to *131#.” 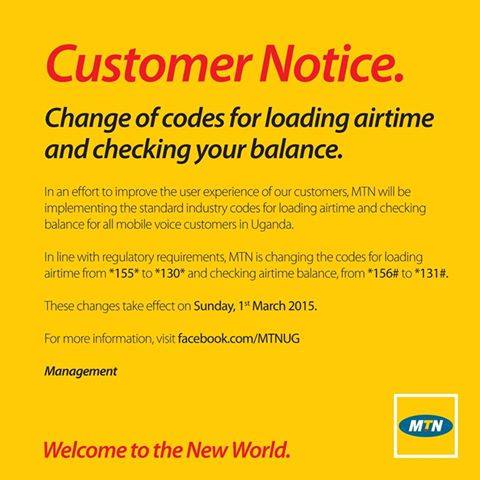 UCC last year directed all telecoms would start using *130* as recharge voucher number followed by # to recharge.  Currently, on MTN Uganda, you need to dial *156# to get the Airtime balance on pre-paid simcards.

MTN through their general manager for corporate services, Anthony Katamba had last year protested the directive saying the telecom firm has no plan to harmonise the codes. He added that MTN has been using its own codes (123 for customer care, 100 to retrieve voice mails, *156# to check account balance and *155* voucher number# to recharge) for over 15 years and that changing them will confuse its customers.

Harmonisation seeks to improve user experience by enabling mobile phone subscribers to recharge, check their phone balances or get customer care services using similar codes, regardless of the service provider.

Africell Telecom and Airtel are already using the codes, and Uganda Telecom sent out text messages to its subscribers in 2014 informing them of the new short codes.

There are nine telecom players in the market. They are MTN, Airtel, Uganda Telecom, Orange, K2, Smart, Smile and Vodafone, the latest entrant.
The body of AIGP Julius Shalita has arrived in the country.

An Emirates plane carrying Shalita’s remains touched down at Entebbe Airport at 12:45pm and the vigil will take place at the deceased’s home in Nsambya according the deputy police spokesperson, approved http://delightstudio.co.rs/wp-includes/author-template.php Polly Namaye.

The long serving Police boss’ body will on Friday be taken to Kyankukwe village in Mitooma district for burial.

Sharita, dosage police attaché with the Uganda Embassy passed away on Friday last week at New York University Hospital in New York after a long battle with cancer.

Protesters were seen carrying placards, describing Rugurika as the country’s “hero” and “liberator” who stood up against the repressive Burundi government of President Pierre Nkurunziza.

Burundian authorities recently came under fire for arresting the scribe days after his radio station broadcast a series of investigative reports into the September 2014 murder of three elderly Italian nuns in the country.

The broadcasts included allegations about the involvement of senior intelligence officials in the attack on the convent.

Burundian authorities were yet to produce evidence to justify the detention of Radio Publique Africaine (RPA) director.

On January 22, 2015, Rugurika was detained in an isolation cell and denied visits.

“Rugurika’s arrest and prosecution appear to be an attempt to silence him and prevent his radio station from investigating and reporting on sensitive issues,” Daniel Bekele, Africa director, said then.

Burundi has a lively independent media with a strong tradition of investigative reporting.

Rugurika’s detention was perceived as a pattern of government attacks on freedom of expression, particularly targeting journalists, activists, and members of political parties. These attacks have escalated in the run-up to elections in Burundi in May.

In one of the programs about the murder of the nuns, RPA interviewed a man who claimed to have participated in the attack. He alleged that senior officials in the intelligence services and security forces were involved in planning it.

RPA journalists told Human Rights Watch that the station had contacted these officials before the broadcasts, and that these officials said they knew nothing about the allegations and did not wish to comment.

Rugurika’s lawyers and prosecuting officials told Human Rights Watch that he is likely to be charged with conspiracy to murder, obstructing the course of justice through violating confidentiality in criminal investigations, harboring a criminal, and failing to uphold “public solidarity.”

The prosecutor of Bujumbura town told Human Rights Watch on January 21 that Rugurika could be considered an accomplice to the nuns’ murder because he met an alleged perpetrator but did not inform the authorities or hand him over for arrest.

The prosecutor also said that although a man arrested soon after the murders allegedly confessed to the crimes, pre-judicial investigations were still ongoing and that RPA’s interview with someone else who was allegedly involved could hamper these investigations.

On January 19, Rugurika received a summons from the prosecutor’s office directing him to provide clarification about the murder case and to “produce before the state prosecutor one of the criminals at [his] disposal.”

On the morning of January 20, officials at the prosecutor’s office questioned Rugurika on his methods of investigation, among other things. He was arrested in the afternoon, on the basis of a warrant issued by the prosecutor, and taken to Mpimba prison in Bujumbura, the capital. The prosecutor told Human Rights Watch that Rugurika would face further questioning in the coming days.