This was after presenting credentials to President Uhuru Kenyatta on Tuesday.

Barege was until recently Burundi’s envoy to Uganda.

He left Kampala last week to take up his new posting in Nairobi after serving in Uganda for seven years.

Barege assured Kenyatta of Burundi’s commitment to deepen bilateral ties for mutual cooperation especially in the areas of trade and security.

“I am optimistic my new Tour of Duty will further strengthen the already Great Bilateral Relations between our Sister States,” he said.

In Uganda, Barege was credited for strengthening Bujumbura’s ties with Kampala.

During the 2015 coup attempt in Bujumbura, Barege worked closely with Ugandan security services to help in the restoration of normalcy.

He also played a critical role in mobilizing Ugandan businessmen not to abandon Burundi in the wake of the political violence in the country.

Barege also encouraged Burundian refugees to return home as soon normalcy was restored in the country.

Barege presented his credentials alongside other 10 new diplomatswho promised to support Kenya’s bid for one of the non-permanent seats on the United Nations Security Council.

The pledges to support Kenya’s candidature for the UNSC seat during the election scheduled for June next year were made at State House, Nairobi, when President Kenyatta received credentials from 11 new envoys.

Among the new envoys is the United Kingdom High Commissioner Ms Jane Marriot who replaces Nic Hailey whose tour of duty in Kenya has ended.

The envoy from Greece said his country will support Kenya’s bid for the UNSC seat as he called for Kenya’s reciprocal support for Greece’s bid for one of the non-permanent UNSC seats in 2024.

Ambassador Winpeg Moyo from Zimbabwe said her nation supports Kenya’s bid for the non-permanent seat and hopes Kenya will win.

Diplomats from the EU, UK, Israel, Pakistan, Togo, Burundi, Czech Republic Gabon and Gambia said Kenya is a strategic partner for their countries and that they will continue to support Kenya’s security interests.

The new UK High Commissioner said she will work to deliver a stronger and mutually beneficial security and defence partnership with Kenya especially in combating violent extremism and terrorism.

“I would also like to pay our respects to the continued commitment and sacrifice of your security and defence forces and society leaders who fight against extremism and terrorism,” said High Commissioner Marriot.

Ms Marriot said Kenya and the UK today “stand as two vibrant and modern countries, crucial to the success of our respective regions and with important roles in the commonwealth and in supporting the rules-based International system”.

She said the UK is committed in supporting Kenya’s Big Four Agenda, adding that the Africa Investment Summit 2020 that will be held in London provides further impetus to support Africa’s development agenda and create dynamic business environment.

On his part, the EU envoy said European countries regard Kenya as having the economic and political weight to make a decisive contribution to stability in the region.

He said Kenya’s commitment to regional stability is proven by its contribution to AMISOM and the hosting of more than 475,000 refugees.

President Kenyatta welcomed the new envoys to Nairobi and urged them to work closely with his administration for the mutual benefit of Kenya and the countries they represent.

He assured the new envoys of his full support as they embark on their tour of duty in the country saying he looks forward to working with each one of the new diplomats in deepening bilateral ties between Kenya and their respective countries.

Kenyatta: Kenya to Reduce Electricity Cost by 30% to Boost Manufacturing 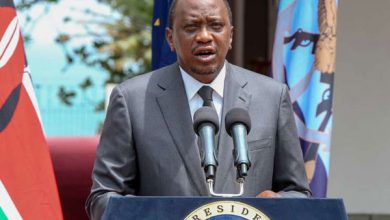