This is ChimpReports’ Morning Intelligence Briefing.

The report gives readers an early morning grasp of what’s happening in the East African region.

The exclusive reports run from Monday to Friday.

Bujumbura: Burundian judiciary has ruled that leaders of the failed 2015 coup in Bujumbura must pay for deeds, just two days after the Supreme Court ordered seizure of the putschists’ property.

“They have to pay for what they destroyed,” a high ranking judicial official who preferred anonymity to speak freely, told ChimpReports on Friday morning.

“Their actions led to bloodshed and destruction of property. They must be consequences for such actions,” he added.

The country’s chief justice Francois Nkezabahizi on May 15 ruled that the state seized assets of 32 suspected coup leaders, who include military officers and journalists living in exile.

Below is the full list of the affected people: 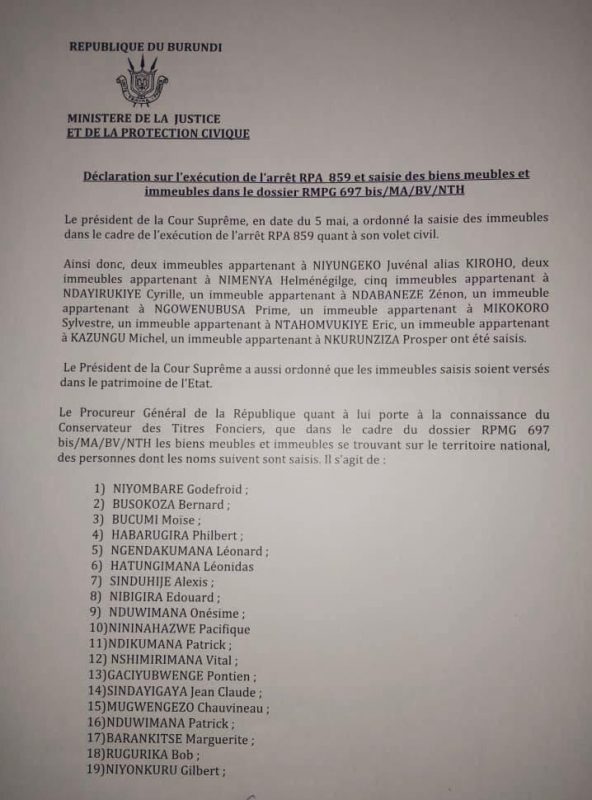 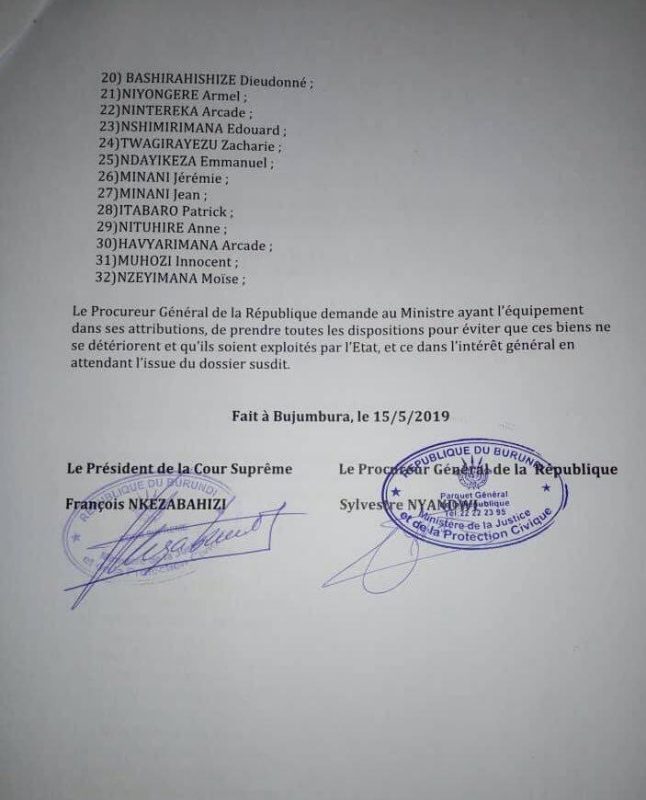 Khartoum: Opposition groups in Sudan have rejected the agreement   signed between the Transitional Military Council and the Alliance of Declaration of Freedom and Change Forces (FCF), underscoring the deepening political crisis in the country.

The military junta recently signed a deal with Alliance of Declaration of Freedom and Change Forces whereby they would hold 67% of the legislative council seats while the remaining 33 percent will be allocated to other forces and political parties.

However, 2020 Forces, which is formed by groups that participated in the national dialogue and headed by al-Tayeb Mustafa, rejected the deal, saying the seats allocated to other groups outside the agreement were few.

“We reject the right given to FCF to form the cabinet and sharing the sovereign council powers with the military council,” 2020 Forces said in a statement seen by ChimpReports on Friday morning.

“The FCF behavior reflects spirit of exclusion, selfishness and dictatorship that is more authoritarian than the former regime despite their chants of “freedom, peace and justice,’” the statement added.

The group also resolved to fight and oppose the agreement with all peaceful means and demanded a revision of the agreement which they labelled “unjust.”

Nevertheless, the Chairperson of the African Union Commission Moussa Faki Mahamat commended the Sudanese stakeholders for the progress being made towards reaching an agreement for a political transition in Sudan and completing the negotiation cycle in a reasonable time in order to adequately address the legitimate concerns of the Sudanese people.

He pledged support of AU to the Sudanese stakeholders to achieve a lasting political agreement.

Residents of Nyakarongo and Kitengule villages in Pakanyi Sub-County, Masindi district are living in fear after a herd of elephants strayed from Murchison Falls Park before invading their villages.

According to Scovia Kusiima, a resident of Kitengule, eight elephants invaded on Wednesday night destroyed several gardens there before they were scared away by residents who banged items like jerry cans and drums.

Kusiima said some residents were no longer attending to their gardens for fear of being attacked by the elephants.

She appealed to Uganda Wild life Authority (UWA) to rush to their rescue by driving the elephants back into the National park.

Efforts to get a comment from area LC1 chairman Kitengule on the matter were futile as his known telephone was not available at the time of filing this story.

But the former LC1 chairman Kitengule village, Johnson Byabasaija confirmed the reports saying the elephants came from Nyakarongo and invaded the village, forcing residents to spend sleepless night as they tried to scare them away.

Byabashaija also called upon UWA to do more to protect the people and their property.

This is the second time stray elephants from Murchison Falls National Park are raiding the same area in two months this year, the first being in March.

OYAM DISTRICT: Uganda People’s Congress (C) leaders and those of the Forum for Democratic Change have resolved to endorse President Museveni as the sole candidate for the 2021 Presidential election, Chimp Corps report.

The opposition figures said while they don’t belong to the NRM party, they agree with President Museveni’s development agenda especially infrastructure development, peace and development.

The move comes at a time President Museveni is intensifying mobilisation activities across the country ahead of the 2021 polls.

Amidst cheering and dancing, Hon. Ogwal Ojok the NRM Chairman for Oyam district read a resolution endorsing President Museveni as the sole candidate. He was seconded by Onac Okello the LCV chairman of Kwania district, a staunch UPC officials, Brian Ogutu, the LCV Councilor and Chairman FDC in Oyam, Celestine Ouma, the UPC LC1 councilor and secretary for Finance and administration in Oyam district and Bashir Masor, a Councillor.

The leaders later presented to Museveni a shield, spear and a stool which symbolize power.

Officials say the northern region has witnessed unprecedented growth since the end of the Kony war and peace returned, hosting one of the largest dams in Uganda, Karuma, and a road network from border to border.

President Museveni is in Lango region as part of his national tours to promote the jobs and wealth creation campaign through zonal meetings. The President is due to hold a rally in Lira on Friday and later address the nation at a press conference.