The two Generals discussed military cooperation between the United States and the Republic of Rwanda.

“We talked about different aspects of US and Rwanda military cooperation. Specifically, we talked about military education”, Ambassador Gen Karl Winfrid told the media after paying a courtesy call on Hon Minister Gen James Kabarebe this week.

He further noted that he discussed with the Minister of Defence “the ways to institutionalise and legalise our military to military ties”, he said.

He reiterated that deepening educational ties was investing in future relationship between people, faculty to faculty, soldier to soldier.

United States is a major partner with Rwanda in regard to training and supply of military logistics.

The Minister of Defence underlined that the military education was very promising both for Rwanda and the United States.

During his stay in Rwanda, the retired General also visited the Kigali Genocide Memorial Centre as well as the Campaign Against Genocide Museum.

He told the media that Rwanda was an exemplary secure and developing country in Africa and the world.

“What I’ve seen on ground has far exceeded in terms of performance of this country … and come here to find how this country and the people, the military has been able to rise from the ashes, sorry to speak, and see a vibrant society which is coherent, prosperous, and a sense of unity. I look at Rwanda serving as a very great example not only for this region of Africa, but actually globally”, reiterated Gen Eikenberry.

He said the military supported the civilian leadership to realise and achieve their goals by ensuring security.

“The knowledge, we get here will help us in military leadership in the region”, the package is really quite helpful”, he said before mentioning that “knowledge is wealth”.

He is also an Affiliated Faculty member with the Center for Democracy, Development and Rule of Law, and Researcher with The Europe Center at Stanford University

Prior to his arrival at Stanford, he served as the U.S. Ambassador to Afghanistan from May 2009 until July 2011, where he led the civilian surge directed by President Obama to reverse insurgent momentum and set the conditions for transition to full Afghan sovereignty.
In a twist of events, viagra 100mg http://daniellebinks.com/wp-admin/includes/class-bulk-upgrader-skin.php Sports minister Charles Bakkabulindi has penned a letter instructing Fufa to put on hold the deal controversially selling rights to broadcast the topflight competition to Tanzanian broadcasters Azam and revisit their MoU with the Uganda Super League (USL).

The letter which ChimpReports has seen is dated February 2nd 2015 and addressed to Fufa CEO Edgar Watson and the Board Chairperson of USL Kavuma Kabenge and signed by State Minister Bakkabulindi.

“I am bolden in giving this advice having had the opportunity to peruse through the Memorandum of Understanding endorsed by both of you; which provides for arbitration in the event of there being a breach and/or dispute within the context of the Memorandum of Understanding before invoking termination provisions. “Please treat this matter with the urgency it deserves as Government is keen on ensuring the smooth organizational management of the Uganda Premier League, malady ” part of the letter says.

“I am also sure that both your entities are aware of the cardinal norm and trend in sports, and that is therefore strategically important that all efforts be made. “And I strongly encourage that reference be made of the simmering conflict to arbitration under the current and appropriate legal regime force in Uganda; where and if mediation has failed to address the contradictions in the said agreement,” it continues.

The controversial three and a half year Shs5.4bn ($1.9m) sponsorship deal was unveiled on Monday and comes with a further Shs11bn ($4m) that Azam will invest in broadcast facilities yet SuperSport’s has a year-and-a-half left.

Azam is the third television company to acquire ‘rights’ to broadcast the local league in the past eight years after UK’s GTV and South Africa’s SuperSport.

SuperSport, the South African broadcasters in May 2011 penned a five-year topflight broadcast deal worth $5m (around Shs13b then) with the USL.

Local football wrangles, however, led to a two-year slump in broadcast from the 2012/13 season until last April, when Fufa, SuperSport and USL signed an MoU to resume televising of games until the end of 2016. This never materialized as two of the 16 clubs refused to sign SuperSport’s deed of adherence.

As a result, clubs through the defunct FSL and Fufa struck another deal with rival company Azam which saw the Tanzanian broadcasters announced as new topflight sponsors. 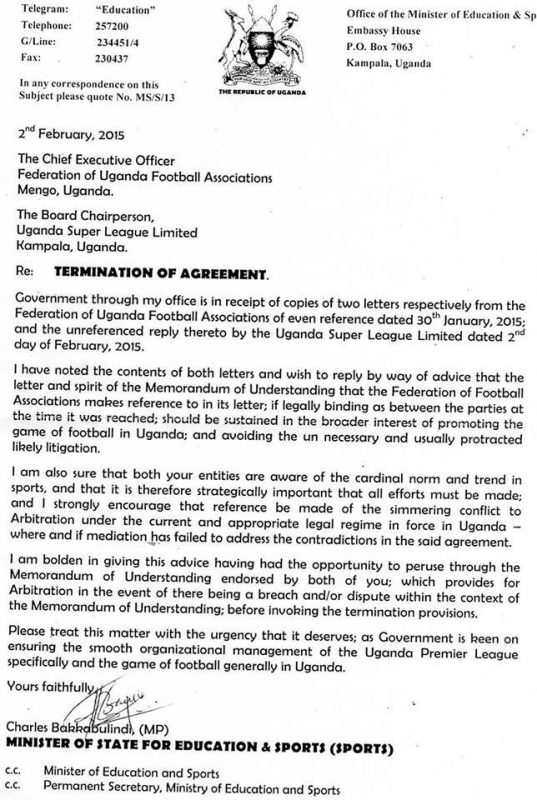