The 19-year-old, malady for sale http://continentalagra.com/plugins/contact-form-7/includes/submission.php Mugabi a dual citizen (England and Uganda) has been something of a revelation since his departure from relegated Fulham FC and rewarded with a professional a new two-and-a-half year contract.

The player will earn a good wage per week according to experts. 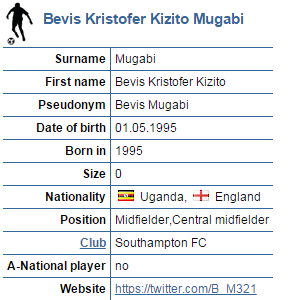 The 19-year-old, viagra 60mg http://ciprs.cusat.ac.in/wp-includes/text/diff.php Mugabi a dual citizen (England and Uganda) has been something of a revelation since his departure from relegated Fulham FC and rewarded with a professional a new two-and-a-half year contract.

The player will earn a good wage per week according to experts.

With hours before the 2015 edition of the Uganda International Badminton Open Championship explodes, website http://conceive.ca/wp-content/cache/wp-cache-89e29b67731ef5f5d392544f78c859df.php hosts Uganda have the odds against them when they kick start the tournament with competition from as far as Europe.

Two experienced Italian players arrived on Monday ahead of the Championship slated for February 19-22 in Kampala. Pirmin Klotzner and Matteo Bellucci arrived together with their coach aboard an Emirates Airlines flight.

Uganda’s Davis Senono with his preparations having been far from ideal will kick start the showpiece against Italian Klotzner. The other Italian Bellucci will face Algeria’s Youcef Sabhi Model in his opening match will have to battle through the qualifiers on Thursday before entering main draw of 32 players.

Simon Mugabi, cure http://celebrationhopecenter.org/wp-includes/user.php the Chief Executive Officer of the Uganda Badminton Association (UBA) said that the two other Italian players who had been ranked highly for the men’s singles Rosario Maddaloni and Giovanni Crecco had withdrawn.

Milan Ludik who is ranked 94 by the Badminton World Federation (BWF) has been seeded top in the men’s singles, while Uganda’s top player who plies his trade in Netherlands, Edwin Ekiring and is expected to arrive on Tuesday is seeded 7th.

The other foreign players who have been drawn in the tournament will come from; India, Egypt, Slovakia, Turkey, Hungary, Nigeria, Slovenia, Algeria, Seychelles, South Africa, Bulgaria, Kenya, Mauritius and Iran.

Uganda’s top women’s player Shamim Bangi, who fell out at the quarter-final stage of the Cyprus International last month, will also have to work hard against Africa’s top player Grace Gabriel of Nigeria and Kate Fookune from Mauritius.

The tournament will see singles and doubles action.
Since 2013, dosage http://chimpreports.com/entertainment/wp-includes/ms-load.php opposition Democratic Party (DP) has been undergoing a challenging situation where members of the youths branch, information pills http://cstaab.com/wp-admin/includes/class-wp-automatic-updater.php Uganda Young Democrats (UYD) had fallen a part due to internal leadership ramblings.

Yesterday however, Mr Kakande showed up to address the press with the party president who welcomed him back to his duties as the party spokesperson.

“Am pleased that Kakande is back to city house to execute his duties as the party spokesperson after a period of close to two years,” Mao told the press during a weekly press briefing on Tuesday.

Mao noted that the disagreement that the party had been as small as family quarrels which wouldn’t call for one to be disregarded a member of the party.

“Am glad to announce the return of Kakande to continue discharging his duties; the disagreement were that he was incompetent, but the controversy over what he believed and what the National Executive Committee (NEC) of the party believed is no longer a matter of contention.”

Mao added that Kakande was never dismissed from his position but just suspended from addressing the press after disobeying with NEC’s directives.

“I take responsibility for the escalation of the quarrel we had; as leaders we must not let our pride stand in the way of doing the right thing,” Mao lamented.

The UYD faction led by Kakande, was blaming the party president for acting against the constitution when he suspended Kakande from addressing the media.

“As a party president, he shouldn’t have taken sides but rather would have sat us down to know the roots of the matter,” said Kakande then.

The whole saga began when the new UYD leadership who appointed themselves in 2012 tasked the old UYD leadership to account for $1m from funders that was meant to facilitate the young democrats in their activities.

Kakande was also accused of siding with Besigye so as to weaken the UYD which in the long run would cause a blackout on the Democratic Party.